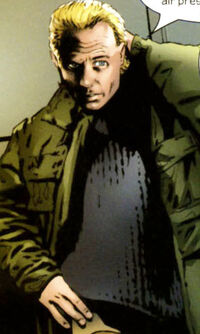 It's less we didn't get along and more that we don't have anything in common.

Franklin Storm was a scientist at the United States Atomic Research Center. His wife, Mary, and was a fellow scientist at the center. They had two children, Johnny and Suzy. He and Johnny never had a father son relationship and simply "let Johnny be Johnny." On the other hand, he and Mary took great interest in Suzy, a child prodigy.

Retrieved from "https://marvelcomicsfanon.fandom.com/wiki/Franklin_Storm_(Earth-774237)?oldid=187580"
Community content is available under CC-BY-SA unless otherwise noted.