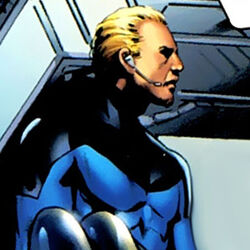 My children are going to lead the world into the future. My only regret is that Mary and I won't be here to see it.

Franklin Storm has always been a gifted scientist who tended to put his work above his family. However, after his wife, Mary, died in a car crash, he realized what an absent father he'd been. Over the next few years he made an effort to connect with his children, and formed a genuine bond with his daughter, Sue, who shared his aptitude for science. His son, Johnny, however, only grew further away from him.

After spending years working in the Baxter Foundation, he and his daughter were recruited to work on Project: Pegasus alongside Reed Richards. They developed a rocket called the Marvel-1 with the intent to travel into space and study cosmic radiation. Franklin was hesitant to let his daughter go on the expedition, but after Johnny stepped forward demanding to help pilot, he decided this was his chance to be the father his son wanted him to be.

After the three of them and Ben Grimm returned to Earth mutated by the cosmic rays, Franklin threw himself into helping them understand their powers. Eventually when the Fantastic Four came into conflict with Doctor Doom, Franklin had the idea of luring him to Project: Pegasus in an attempt to use the alien resources there to capture him. However, the plan went horribly wrong, and Doom wound up blasting a laser straight through Franklin's chest. As he laid dying, his children knelt by him and he and Johnny made one final apology to each other, longing for the time they could have spent together.