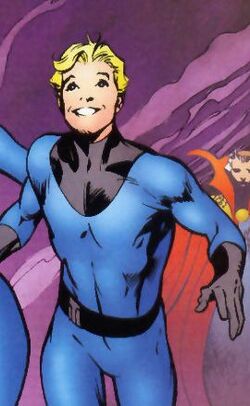 He was raised well when his parents were around. And when they weren't around, or were out saving the world, he was watched over by his godmother Alicia Masters. He loved being in this world, though, as no day was ever boring. Knowing he would never have powers, though, made him feel left out. He always wanted to be a superhero, so he decided he could be the next Iron Man if all else failed. But he still secretly hoped for his own mutant powers. And soon he got them, in the form of totally random powers. These were the powers of telepathy and telekinesis, and they were so powerful, he accidentally put all New Yorkers into a telepathically induced sleep. When everyone woke up, Reed told them it was an alien weapon that had been disabled. He then had power inhibitors placed on him so a similar problem would never happen again.

When he heard the news of the Skrull invasion through a telepathic cry, he knew he had to help. Unfortunately, the Fantastic 5 were out on a mission. So Franklin somehow "chipped" his psychic blocks, allowing part of his powers through, and set off to help. He was gladly accepted into the squad, as he was famous among the small group. In space, he proved a potent weapon against the Skrulls. Upon returning to Earth, he decided to join the team, as he knew there could never be a "Fantastic 6." He soon became a core X-Man, and he would have it no other way.

Telepathy: Franklin has the mutant power of telepathy. He is one of the most powerful telepaths on his world, and he can manifest it in the following aspects:

Telekinesis: Able to lift nearly any object with his mind, and levitate/fly at great speeds.

Precognition: Able to read the future to an extent.

Matter Manipulation (latent): Franklin has the latent ability to manipulate matter, which he does not even know he has.

Reality Manipulation (latent): Franklin has the latent ability to alter reality, but he doesn't know he can do this.

Note: Franklin has installed power dampeners in his mind to prevent losing control. This has also unknowingly blocked his matter and reality altering powers. He never learned he could do this, and is under the impression that he cannot.

Franklin has some minor knowledge of hand to hand combat.

Retrieved from "https://marvelcomicsfanon.fandom.com/wiki/Franklin_Richards_(Earth-1175)?oldid=255946"
Community content is available under CC-BY-SA unless otherwise noted.