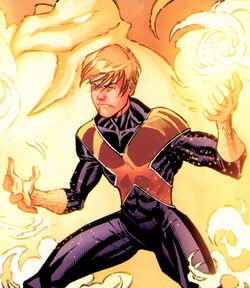 It doesn't take a genius to know that whatever you're planning is a bad idea.

When the Invisible Woman went into labor, things became complicated when Doctor Doom and the Cabal launched an attack on the Baxter Building. However, the Avengers were there to run interference, and after several hours of painful labor, Franklin Richards was born successfully, and the Invisible Woman survived.

From there, Mister Fantastic and the Invisible Woman knew the forces of the universe would be coming after them in an attempt to kill their son. They then devised the plan to escape into a series of pocket dimensions, where they spent several years. However, by the time they returned, they discovered only a few months had passed in real time.

But things had changed. Franklin was now in his teens, and had developed reality-altering mutant powers that his parents have been trying to help him control. Another notable change was that Reed and Sue had sired another child, a daughter, which they named Valeria.

By the time they returned, the Prophecy of Infinity was still in motion. Thanos had murdered the Vision and claimed the Mind Stone, which did manage to circumvent Jean Grey becoming the Phoenix. But the power still longed to be released. The Avengers and the Future Foundation were trying to find a way to annihilate it, but Franklin saw another option; to absorb it into himself.

His parents warned him against it, but he was able to pull it off and absorb the power of the Phoenix Force into himself, becoming one of the most powerful beings in the galaxy. In the process, he became one of the most instrumental forces in stopping Thanos and saving the future.