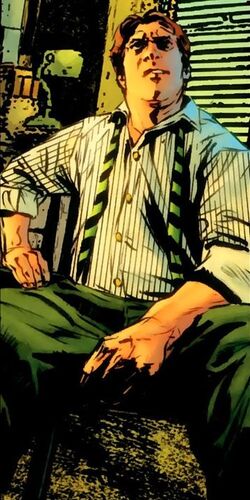 Franklin "Foggy" Nelson was born and raised in New York City. Growing up, Nelson had dreams of becoming a lawyer, despite his parents' desperate hopes for him to live a simple life, with his own caring and overly concerned mother even jokingly considering that he should become a butcher instead. Years later shortly after his college years, Foggy Nelson got into Columbia University law school. He eventually befriended and became the best of friends with his roommate Matt Murdock, a blind fellow aspiring lawyer just like him then and now. When Matt began dating Elektra Natchios, Foggy disapproved, because he thought she was dangerous (which turned out to be extremely true).

Finally becoming successful lawyers together after graduating Colombia University, he then co-founded the law firm Nelson and Murdock with his best friend and worked on cases with a passion for getting justice for the innocent including Karen Page, who eventually became both their friend and colleague at the standing firm, and many others. Despite experiencing many hardships and trials with his complicated best friend, Nelson remained loyal to Matt himself even after discovering that Murdock had been living a secret life as a masked vigilante known as the Daredevil, the nightly Guardian of Hell's Kitchen.

However, the revelation continued to have an impact on the reputation of Nelson and Murdock as Nelson became more frustrated with his friend as Murdock's double life began to interfere with their case defending Frank Castle, the extremist vigilante known as the Punisher. Eventually, Nelson decided to leave their law firm after it unfortunate collapse and accepted the job offer given to him by his on-and-off girlfriend, Marci Stahl, at Hogarth, Chao, and Benowitz, though that change in his career hasn't tear down Foggy and Matt's lasting friendship, but has instead unexpectedly strengthened and solidified as time passes.

Retrieved from "https://marvelcomicsfanon.fandom.com/wiki/Franklin_Nelson_(Earth-61615)?oldid=224712"
Community content is available under CC-BY-SA unless otherwise noted.