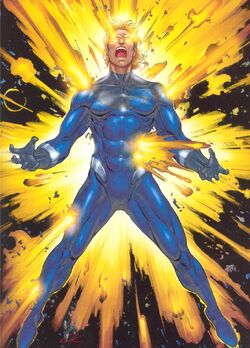 Earth-61615
Base Of Operations
Mobile, including most of A.I.M.'s remaining active headquarters across the globe, most recently the island of Barbuda
Characteristics
Gender

Sacrifices have to be made... We have to live with the choices we make, but sometimes, we have to die with them, too... Now that I'm reborn, I will save this planet with my own genius mind, and if anyone's foolish enough to prevent me from doing so, I can assure you that you'll only earn your own damnation... And remember me, Coulson? I will crush you just like how you once crushed the only chance I had, at saving the world!

Doctor Franklin Hall was a Canadian scientist who was once working for S.H.I.E.L.D. Hall was a former protected S.H.I.E.L.D. asset who became the teacher of Leo Fitz and Jemma Simmons. As an asset, he also became famous for his work and theories on the extremely rare element known as Gravitonium. Dr. Hall ends up abducted from a fully-protected convoy by a military unit who used some gravity weapon and taken to a compound in Malta owned by his former research partner and college friend Ian Quinn, who was the head of Quinn Worldwide, who wants Hall to complete the gravity fields in Quinn's device powered by Gravitonium and weaponize in in the process.

When Agent Phil Coulson finds Hall, he was in the process of sending the gravity-control device and Quinn's house into the ocean, endangering the guests in Quinn's compound. Hall reveals to Coulson that he orchestrated his own kidnapping and states that the gravity element is too powerful for S.H.I.E.L.D. and Ian Quinn while proclaiming that he is "protecting mankind" and "making things right" by embracing the Gravitonium. After Coulson shoots the glass blocking the device, Hall falls towards the device where he is apparently consumed by the mysterious element.

Coulson ordered the mass of Gravitonium be secured in an unmarked vault at the Fridge, a S.H.I.E.L.D. storage facility. Unknown to Coulson, Hall still lives within the mass of Gravitonium and seeks escape. The Gravitonium and the device it powers ends up locked up in S.H.I.E.L.D. custody where it is revealed that Hall is still alive inside the cluster of Gravitonium. After the Gravitonium was eventually stolen by A.I.M. seven months after the events of Ultimate War (under the orders of George Tarleton before his apparent death), a scarred and traumatic Hall finally emerged from the Gravitonium and with his newfound powers to control gravity, he took the villainous title of Graviton. As the co-leader of A.I.M., Hall used his keen intellect and stimulating personality to gather together young individuals within A.I.M. who volunteered to join him and founded a subsidiary group he dubbed as the Children of Tomorrow, whose aim was to perfect the world once they've "fix" it. Their main headquarters was built in an often-cloaked floating island named Barbuda, fueled by a Gravitonium-powered engine to keep it levitating as high as the stratosphere. The island's technology is far more superior compared to the ones in the outside world, making its scientific and technological advancements to be almost on the same level as Latveria and Wakanda.

The world-renowned Avengers International later be facing would be their last known enemies as a publicly-supported team, A.I.M., in Chicago, led by the insanely powerful Hall as Graviton and his co-leader who was the evil genius, M.O.D.O.K., the large-headed mastermind who was later revealed to be the responsible perpetrator for secretly assassinating the more infamous Red Skull and subsequently having to remotely taking over his already lifeless body (with Schmidt's consciousness later revealed to have been stored in a framework program) in order to lure the now-retired Steve Rogers into his palms as a part of his unveiled plan. In the midst of the upcoming threat, Rogers had no other choice but to leave his normal life behind for the meantime, in order to investigate and deal with whatever he and allies were going to face.

Unbeknownst to Rogers, it would be personally his greatest and last ever adversary throughout more than eighty years of his entire life as the great Captain America. In his delusional mission to protect the world from those he deems to be its threat overtime, Hall and his A.I.M. forces had attempted to gain more Gravitonium by going through the mantle of the Earth by having him and his men construct an artificial tunnel to it, which endangered the entire planet in doing so, forcing S.H.I.E.L.D. agent and Inhuman heroine Quake, along with some other to assist her (most notably the Avengers International, the Secret Warriors, and the Elementals), to challenge him in the streets of Chicago, starting a brawl between only Graviton himself against several superhumans whose combined strength would possibly rival his own.

During the brawl, Graviton was able to solely handle the attacks of his enemies, although he was too slow to realize that they were distracting him, biding S.H.I.E.L.D. some time to permanently close the artificial tunnel to the mantle of the planet, and by the second he learned their true intentions, he was too late. When Graviton saw the only certain chance of him reaching the potential of his full power, which was by absorbing the remaining Gravitonium found within the Earth's mantle, suddenly go away before his own eyes, he could no longer sense a purpose within himself for the first (and unknowingly his last as well) time in his life, and thus he was driven insane. Now believing that the universe was conceived purely by chance and coincidental circumstances, he claimed that all of life, including his very existence, work for the Gravitonium and mission to use in in "saving the world", was fragile and had not much meaning in the larger scale of this reality. This has prompted him to carelessly wreak havoc across Chicago as he ruthlessly slaughters dozens of lives, most notably General Glenn Talbot, while his adversaries try and stop him from doing it any further.

Thankfully, he was ultimately defeated in the final battle by the second he was re-merged back to the rest of the Gravitonium with the matter-converter engine invented by Hank Pym (along with the help of some S.H.I.E.L.D. scientists, including Leo Fitz and Jemma Simmons), rendering Hall permanently immobile, physically dead, and consciously paralyzed since he has literally merged with the Gravitonium, instead of just being absorbed by it like before. Afterwards, the heroes have decided to launch the Gravitonium, now contained inside an indestructible metallic container, into deep space to finally end his unstoppable devastation and any possibility for him to return pursuing his goal to wipe out a large population of the planet ever again to "save it," according to himself and his now ultimately failed plan.

Loss of One, Loss of All

In his convergence with the Gravitonium, Graviton's defeat was a major loss of the organization, and the mission in doing so, decreasing their greatest of chances to succeed in their very mission, since even M.O.D.O.K. would later meet his doom just as the same as Hall did his earlier during one of the very penultimate moments of the battle, apparently dying at the hands of Captain America, who fully prevented the endgame protocol of A.I.M. that was unleashing a countless swarm of deadly techno-organic creatures originating from a future divergent reality, the same reality wherein Nathan Summers used to grew up in as Cable, onto the prime reality in order to remake the country, along with the entire world once they're successful, with the same techno-organic substance that converted the fearsome creatures into what they were now. Despite succeeding in stopping A.I.M., however, Captain America didn't survived the final ordeal, inevitably losing his life to put an end to A.I.M.'s threat once and for all.

In response to Graviton, M.O.D.O.K., and the rest of A.I.M.'s country-wide assault that left the Avengers broken and America devastated for a long while, a very sympathetic Tony Stark decided to find a way to resolve their serious recurring problem and help his teammates recover since the heroic death of one of their greatest comrades, Captain America, though as the new President of the United States, Larry Trask, was finally elected, Stark was too late to bring the broken team back together. Since the new President convinced the U.N. that the superhumans have become too much reckless and uncontrollable since the events of Mutant Ultimatum and the Battle of Chicago, the reluctant but dutiful U.N. decided they had no other choice but to dismantle the Avengers International.

Gravitikinesis: After being being greatly enhanced by the rare element Gravitonium, Graviton possesses the ability to mentally manipulate gravitons (that carry the attractive, gravitational force between atomic nuclei), enabling him to control gravity. He can surround any object or person including himself with gravitons and anti-gravitons (particles similar to gravitons but with opposite charge and spin), thus increasing or decreasing the Earth's pull of gravity upon it.

Retrieved from "https://marvelcomicsfanon.fandom.com/wiki/Franklin_Hall_(Earth-61615)?oldid=267972"
Community content is available under CC-BY-SA unless otherwise noted.