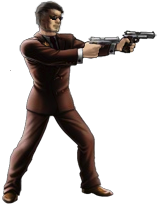 Frank McGee was a decorated police officer for the NYPD for nearly three decades until the day the Terrigen Crystals were spread into the sea. Frank was one among many who became encased in a cocoon undergoing metamorphosis. After breaking out, Frank noticed a change in himself his eyes began to illuminate a bright yellow color which he was able to control the intensity of it.

He tried to return to a normal life but he was prematurely forced into early retirement and his wife soon left him after that. Frank ended up making his way to Attilan's bazaar for sanctuary when he came upon Auran, a member of the city's security force. Learning of his ability and experience as a cop, Auran and Frank became partners, with her giving him a new name, Nur.

Photokinetic Projection: Nur is a NuHuman who possesses the ability to project powerful blinding glares of light from his eyes. So far he is capable of controlling the level of illumination he projects and the distance/width within his line of sight of his target. Also his powers can produce a calm, soothing effect on others depending on the pulsation of light from his eyes.

Detective Skill: Nur is a skilled detective, capable of observation, forensic investigation, and inductive and deductive reasoning of the highest caliber. Given any mystery, he can arrive at the correct conclusions with a fraction of the data.

Interrogation Expert: Due to his experience and training as a police officer, he has an extensive knowledge of interrogation methods.

Equipment: Sun Glasses: ordinarily used to wear a set of shades to obscure his constantly active power, eventually having them modified to feed two siphoning cables into his pistols channeling and magnifying his photokinetic power through them at the cost of serious eyestrain.

Refraction Lens: Frank once made use of a magnification glass made by a NuHuman with silicon abilities in order focus the light he projects into scattered lasers.
Transportation: None known.
Weapons: Attilan Pistols: advanced laser pistols accommodated to all the veteran police forces of the Inhuman local law enforcement of Attilan, Frank recently had them modified to channel his illuminating gaze through them via his shades increasing their striking and blasting power several fold.

Retrieved from "https://marvelcomicsfanon.fandom.com/wiki/Frank_McGee_(Earth-1010)?oldid=190729"
Community content is available under CC-BY-SA unless otherwise noted.