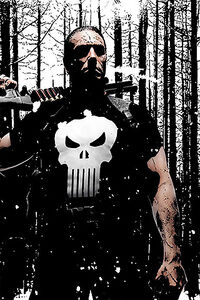 Widowed
Occupation
Vigilante
Origin
Origin
A 4 year Vietnam veteran, Frank Castle became a Vigilante after seeing his wife and children gunned down for accidentally observing a Mafia "hit". Since then he has devoted his life to the task of destroying organized crime wherever he finds it.
Place of Birth
Queens, New York
Creators

Its not vengance, it is Punish!

Born in Queens, New York to parents of Sicilian ancestry, the young Francis Castiglione enlisted in the United States Marine Corps, eventually becoming a U.S. Marine Captain. He married his wife, Maria, who was already pregnant with their first child prior to his enlistment.

During his time in the USMC, Castiglione graduated from boot camp and then went on to United States Marine Corps School of Infantry. While still in training, Castiglione met Phan Bighawk, an American Indian scout. He was assigned to be Castiglione's guide, and through Phan, he learned how to survive in the wilderness.

Following his training, Castiglione served in the Vietnam War in the Special Forces Unit as a point man. He fought in numerous engagements and was the only survivor (from both sides) of a Viet Cong assault on Valley Forge Firebase in 1971.[2] For heroism in the line of duty, he was decorated with the Medal of Honor, the Navy Cross, 3 times the Silver Star and Bronze Stars, 4 times the Purple Heart, and the Presidential Medal of Freedom.

After finishing his second tour of duty in Vietnam, he came back to the United States and had a second child with his wife. He then signed up for a third tour to which he illegally re-entered the U.S. Marine Corps under the name of Frank Castle in order to return to battle. Castle served a total of 4 years in the Vietnam War (1968 to 1971). Six years later (1976) after the American involvement in Vietnam ended, Castle ran Special Black op training missions for Marine Recon Commandos in the upper New York State area.

While on leave, he took his wife and two small children to Central Park in New York City. Coincidentally, the family happened upon the scene of a mob killing on the Sheep's Meadow green in the park. Fearing witnesses, the mobsters murdered Castle's family in cold blood and escaped. Castle managed to survive the attack but was deeply traumatized by the incident. He was going to testify in court to identify the shooters, but Castle was denied this since the New York police department were deeply connected with the Mafia. He decided not to return to Marine duty, but instead, outfitted himself with assorted weapons and a battle suit that displayed a large death's head on the chest, and embarked on a one-man anti-crime campaign throughout New York City. Castle devoted the rest of his life to eradicating organized crime, using the nom de guerre of the Punisher.

The Punisher used his combat experience (four years as a US Marine in a special operations unit in the Vietnam War), guerrilla warfare (combat assault attacks, assassinations, ambushes, hit and runs, bombings, using the enemies' own money, weapons, and supplies against them), urban warfare (using the crowded city of New York to blend in and disappear), psychological warfare (putting fear into the hearts of criminals), using detective-like skills (talking to people, reading obtained files on the people he goes after, tracking and surveilling the enemy), always adapting to the enemy such as using the Mafia's own methods and tactics against them (interrogating and torturing suspects to death in order to get information from them) and whatever resources and means may be necessary to do so, ranging from light anti-tank weaponry to enraged polar bears, piranhas, and even a hydrogen bomb.

The Punisher fought virtually about every known criminal organization, including the Italian Mafia, the Russian Mafia, the Japanese Yakuza, the Colombian and Mexican drug cartels, the Chinese Triads, Jamaican Yardies, the Aryan Brotherhood, the Irish Mob, biker gangs, street gangs, gunrunning militias, muggers, killers, rapists, psychopaths, sadists, pedophiles, and corrupt cops. The Punisher also assaulted such criminal business enterprises as drugs, weapons smuggling, money laundering and human trafficking. The Punisher fought organized crime long enough to know their modus operandi and predict their actions. Many of these organizations tried to kill the Punisher, using both their own men and hired contract killers. But the Punisher managed to kill almost every type of assassin, hitman, bounty hunter and mercenary sent after him.

The Punisher was highly mobile. He had many bases of operations and did not limit himself to working only in New York city. He has been to many places in the U.S. and around the globe fighting crime such as the British Isles, Latin America (Central and South America), Europe and Russia. The Punisher had an extensive criminal record due to his activities. Law enforcement such as the police, the FBI, the CIA and even S.H.I.E.L.D. were aware of his existence and made many attempts to capture him; however, many rank-and-file officers were reluctant to take action against the Punisher because they largely agreed with him. The Punisher himself disregarded what police and the public thought of him. The Punisher killed corrupt cops, but in doing so stirred police into heightened action against him. Castle was also caught and imprisoned (generally in Ryker's Island) many times, but always escaped.

As the Punisher he has no superhuman powers

Master Martial Artist: Castle is a seasoned combat veteran of exceptional skills. He is well-versed in the arts of warfare and hand-to-hand combat. His styles of choice being Nash Ryu Ju Jitsu, (the four-style martial art founded by his Sensei Adam Nash and the Marine Corps LINE combat system) Ninjutsu, Shorin-Ryu, Hwarangdo, and Chin Na. He is an exceptional knife fighter who carries up to 3 or 4 different types of edged weapons, preferring the knife he learned to fight with in the USMC: the Ka-bar.

Expert Marksman: He is an exceptional marksman who is sometimes depicted as being ambidextrous in this respect. He is skilled in sharpshooting and knife throwing

Castle once Relied on a "synaptic glue" medication to keep his mind together due to brain damage caused by his fight with Daken and becoming frankencastle.

The Punisher's first outfit was a form-fitting black Kevlar bodysuit with a large white skull on his chest. According to Frank Castle, this drew the attention and the aim of the criminals to his heavily armored body, instead of his more vulnerable head. Each tooth of the skull was actually spare ammunition for firearms.

Transportation: Many vehicles
Weapons: The Punisher employs a vast array of conventional firearms including machine guns, rifles, shotguns, handguns, knives, explosives and other weapons culled from common and organized criminals and military sources during his operations. A vast majority of his weapons have roots in military forces around the world, and typically employs weapons and accessories limited to military operations.

He has a good friendship with William Marshall

Retrieved from "https://marvelcomicsfanon.fandom.com/wiki/Frank_Castle_(Earth-FF9142915)?oldid=138264"
Community content is available under CC-BY-SA unless otherwise noted.