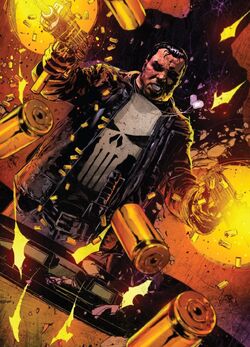 Francis "Frank" David G. Castle Sr. was born in Hell's Kitchen, New York and joined the Marine Corps at his early adulthood after finishing military academy in the early 2000s, where he was eventually placed within the Cerberus Squad, under the command of Colonel Ray Schoonover and William Rawlins III, also known as Agent Orange, undertaking classified missions behind enemy lines. Fearing he was slowly losing his honor under the command of Agent Orange, Castle resigned from the covert ops squad and willingly returned to his wife and children, only to lose them all during a brutal shooting in Central Park, which was later revealed to be an assassination attempt orchestrated by some of the former members of Cerberus Squad.

Unable to move on and failed by a corrupt criminal justice system who left his the slaughter of his family unjustified, Frank furiously sought revenge, devoting his entire life to the task of destroying organized crime wherever he finds it, along with his core mission of seeking to avenge his own family's deaths. Due to his extreme vigilante actions, Castle became The Punisher, as he aimed to clean up New York City of crime by any means necessary.

Trial of the Punisher

At some point while he was still seeking vengeance for his family's deaths, Castle came into conflict with the Guardian Devil of Hell's Kitchen, Daredevil. Castle was soon arrested and, despite the efforts of Nelson and Murdock, was sentenced to life within prison. However, Castle was almost immediately freed with the help of Wilson Fisk, and discovered that the mysterious criminal Blacksmith, who was Schoonover all along, was the one who was responsible for his family's murder, or at least he was partly responsible for the latter.

During his ongoing hunt to kill all of the gangs who had been responsible for killing his family among others, Frank was eventually found by a man by the name of Micro who revealed to him that more people had been involved in his family's death, and they were involved in the illegal Operation Cerberus he had performed in Afghanistan. While hunting down all those involved, Castle came back into contact with his old best friend Billy Russo, who he eventually learned was working with William Rawlins to try and assassinate Castle back at the day.

Having discovered the whole truth regarding the loss of his loved ones, Castle allowed himself to be captured by Russo and Rawlins, until he eventually killed Rawlins and, in a brutal showdown at Central Park, he had managed to defeat Russo and disfigure his face beyond repair, an action of his that would subsequently turn his old friend turned rival into the future powerful ravenous and vengeful mercenary, Jigsaw.

After months of continuing his vigilantism across the United States as the Punisher, Frank was courageously obligated to join the heroic fight when the Earth was in great peril due to the arrival of extraterrestrial threats, led by the dangerous unearthly race of creatures guided by Loki, known as the Chitauri. As a result, he coincidentally joined forces with other the street-level heroes to reform the heroic team Defenders, once again to fight off the descending aliens from above, alongside the S.H.I.E.L.D.-based turned independent heroic team known as the Avengers. With the best efforts of both parties, the Chitauri Invasion was thwarted once and for all, and the Earth was saved, thanks to it's mightiest and most fearless heroes who bravely helped defend it. Although he aids many heroes in their quests later on during their future encounters, they often come into conflict over his way of dealing with crime.

In the aftermath of the Punisher's participation along with the reformed Defenders during the Chitauri Invasion, the former decided to part ways with the vigilante group afterwards, believing that he and his one-time teammates would never get along in his unchangeable methods of handling criminals, though despite his decisive departure from the Defenders, he commented that he was still open to willingly assist them, whenever they'll be needing his help since he kind of enjoyed working alongside the street heroes of New York. After he left the Defenders, Frank immediately continues his voluntarily role as one of the, if not, the most extreme vigilantes in New York City.

With his return as the Punisher, he went to investigate the slow but progressive increase of criminal activities, from drug dealings to the rapid increase of murder cases, throughout New York with the helpful assistance of his expert hacker ally Micro, whom he had found contact with once again since their independent crusade against the unhinged Cerberus Squad. Expecting that their investigation would take a while before they would eventually discover a big lead on this case, Micro didn't anticipate that he would discover who was the real perpetrators of the following crimes, the Maggia crime syndicate, only for that revelation to be found suspicious by Castle, since he knew that most of the crime families involved within the Maggia were either dismantled or were forced to travel abroad during the late-2000s, when Frank was still in his first steps as the vigilante.

Knowing that the Maggia was the only organization responsible for all those diabolical activities, Frank immediately fully-armed up his arsenal, start up his battle van, before going to the exact locations across the five boroughs where some of the Maggia's secret branches are found, which Micro had successfully tracked down. For the next following days, each of the Maggia's branches were effortlessly eliminated by the Punisher, although the latter's efforts were proven to be wasted the first time, since every time he tried to interrogate the last member from the branches on who exactly was ordering them to commit the crimes, none of them were able to properly answer to him, since those members (who were actually hostages forced to work for an unknown individual) ended up getting killed in different ways, moments even before Frank was able to hear their answers.

Feeling too dismayed about their recent loss in finding out any answers regarding the sudden reemergence of the Maggia and a recent discovery that each member he tried to question were innocent hostages, which led to him being framed by the N.Y.P.D. for those murders, Frank requested Micro to search for more possible leads, though no further findings were discovered. However, as Frank looked back to the five locations where he last visited, he started realizing that those areas felt too familiar, to which was proven correct not long after he decided to revisit it in secret. During his solo investigation to the five areas, he conveniently found new findings that gave him a penultimate clue in figuring out the real perpetrator to the assaults.

After finding those leads, a series of decrypted codes he found on each walls of each base, Frank was able to finally figure it out with the help of Micro's tech, showing that the codes form a single message delivered by someone named "Jigsaw," and what was more disturbing since the message have directly mentioned Frank's real name. Due to this, Frank decided to continue his mission once more, interrogating several criminals around the city through Micro's sources until he was able to successfully determine the real identity of the "Jigsaw" persona, enraging Castle that his old friend was suddenly back to his evil ways, along with the discovery to the criminal's hidden headquarters, a former base of operations to a portion of the Maggia. Before, the S.H.I.E.L.D. director Nick Fury came to contact Frank and tried to convince him to stay out of their way and let them handle the situation, otherwise they wouldn't be able to fully protect him from the authorities' second attempt at getting him to trial after being falsely claimed for Jigsaw's actions.

When confronting Jigsaw for the very first time, Frank easily kills off his henchmen bodyguards, leaving the two in a bloody duel. By the end of their first known confrontation as Russo becoming the Jigsaw persona, Frank had almost gotten the opportunity to execute Billy in his own hands out of rage, before unexpectedly learning that his old friend has actually been playing an important part of a larger criminal community that has already risen and has also taken all over the state for the past few months, revealing themselves as the members of Kingpin's powerful and manipulative secret empire. Frank was distracted at the moment, giving Russo the chance to pull out his usual wrist blade and severely injure the vigilante, before escaping in the process. Having left him for dead, Frank was just about to pass out from shock, right until he was miraculously saved by the late arrival of S.H.I.E.L.D. agents, led by Nick Fury himself who came to Frank's aid, promising to him that they would eventually help in tracking down Russo, just not at the meantime after his escape.

As the Punisher, he has no superhuman powers. Although, S.H.I.E.L.D.-'s secret intel classified him as being power, level 6 or greater due to his remarkable fighting skills, his weaponry, and his use of lethal force.

Retrieved from "https://marvelcomicsfanon.fandom.com/wiki/Frank_Castle_(Earth-61615)?oldid=241555"
Community content is available under CC-BY-SA unless otherwise noted.