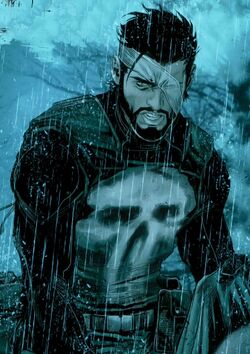 Earth-112129
Base Of Operations
The Outside
Characteristics
Gender

Why do you think I agreed to join this team? Because I knew one way or another, that it would end up killing me. This is my choice.

After returning home from serving in the military, Frank Castle suffered from PTSD. There came a fateful night, when one day he snapped, and killed his entire family. He woke up hours later, drenched in their blood, horrified. Running away, Frank began stockpiling weapons and decided to make up for his wrongs by swearing to only murder bad people, hoping that one day someone would eventually best him in battle and kill him.

Frank was later recruited into the Renegades by The Outsider, under the promise that if he returned to his home world, he would be apprehended by the military and locked up in a maximum security prison, on constant suicide watch. Punisher then joined the Renegades and lasted with the team much longer than he had hoped. However, he would eventually fulfill his desire when they reached a reality where Punisher sacrificed himself to destroy Area 51, which that world's government was using to conduct experiments on Thor.

Retrieved from "https://marvelcomicsfanon.fandom.com/wiki/Frank_Castle_(Earth-112129)?oldid=244515"
Community content is available under CC-BY-SA unless otherwise noted.