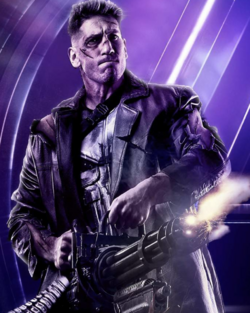 I won't stop until every low life piece of crap is six feet under the ground. Just like my family.

After returning from active duty, Frank Castle was haunted by his actions during the war. The only solace he took was in knowing his family was safe. During his first day back, they surprised him with a picnic in the park. He enjoyed seeing their smiling faces again, until they were no longer smiling.

The family had been caught in the crossfire of a mob shootout, and Frank was the only survivor. Holding his wife and children dead in his arms broke Frank, and he swore that he would get revenge. He burned down his house and set up shop in an abandoned warehouse, where he armed himself to the teeth and developed the alternate persona of the Punisher.

He then began waging a one man war on crime, hunting down and executing any criminal he could find. This course of action eventually led him into conflict with fellow vigilantes like Daredevil and Spider-Man, who opposed his nonstop killing.

However, the vigilantes would often find themselves allied against a common threat, usually connected to the Kingpin. Castle would eventually be apprehended by Hawkeye and Black Widow.

He was imprisoned in the Raft, but was offered an out by Nick Fury. Punisher agreed to join the secret black ops team, the Thunderbolts, which would operate under the Avengers, but handled directly by General Thunderbolt Ross. While Agent Venom was the team leader, the Punisher quickly rose up to become his second in command, having earned Ross’s respect.

Retrieved from "https://marvelcomicsfanon.fandom.com/wiki/Frank_Castle_(Earth-101)?oldid=249864"
Community content is available under CC-BY-SA unless otherwise noted.