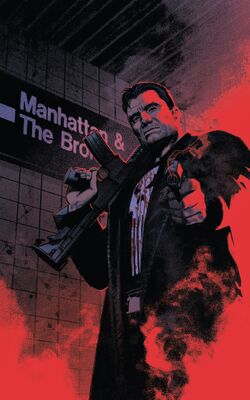 Skull, Killer of Many
Race

Frank has the same history as his Earth-199999 counterpart.

The Punisher posses no superhuman powers.

Mortality: Castle is still an ordinary human, he can get hurt by weapons or falling.

Transportation: Various vehicles
Weapons: The Punisher employs a vast array of conventional firearms including machine guns, rifles, shotguns, handguns, knives, explosives and other weapons culled from common and organized criminals and military sources during his operations.

Retrieved from "https://marvelcomicsfanon.fandom.com/wiki/Francis_Castle_(Earth-609)?oldid=257648"
Community content is available under CC-BY-SA unless otherwise noted.