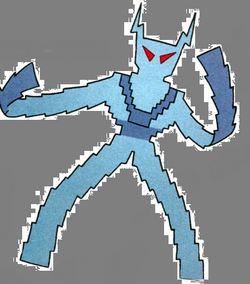 Black, None as Videoman
Status
Citizenship

Videoman's history is likely the same as that of his Earth-8017 counterpart until being possessed by Videoman, at which point it follows that of his Earth-616 counterpart. Videoman decided to hold up a corner store. A newly-reformed Juggernaut decided to fight him in order to prevent embarrassment and save the store. He was soon joined in his efforts by the Sandman. The two were able to incapacitate Videoman.

Videoman is vulnerable to microwave energy and being frozen.

Retrieved from "https://marvelcomicsfanon.fandom.com/wiki/Francis_Byte_(Earth-858)?oldid=40648"
Community content is available under CC-BY-SA unless otherwise noted.