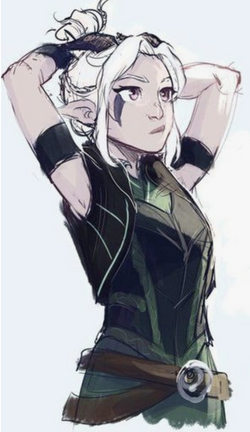 Francesca Cortez was born to two loving parents in the Philippine islands just a few years before the rise of Apocalypse. After his forces besieged the Philippines and sensed Francesca's dormant mutant DNA, her parents were murdered and she was abducted to be bred into a weapon.

She was raised in Apocalypse's mutant detention centers, where they trained to hone her abilities of flight and radar senses to use her for stealth and recon missions against her will. Francesca knew that what the Armada was doing was wrong, but she felt too powerless to fight back.

Eventually, the X-Men would stage a raid on the training center, liberating Francesca and several other young mutants, all of whom decided to join the X-Men. Adopting the name Leatherwings, Francesca finally began to feel like she has a home, going out of her way to be friendly to her teammates in a world that has never given them the same courtesy.

Retrieved from "https://marvelcomicsfanon.fandom.com/wiki/Francesca_Cortez_(Earth-9999)?oldid=245812"
Community content is available under CC-BY-SA unless otherwise noted.