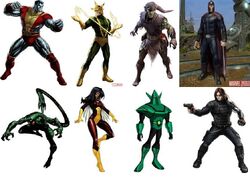 During the Super-Hero Civil War, S.H.I.E.L.D. used nanites reverse-engineered by Reed Richards from captured Latverian nanotechnology (originally created by the Tinkerer in order to allow for easier human cyberisation) to control villains, turning the tide against Captain America and his growing army of anti-registration heroes. However, once the network of nanite-controlled villains reached critical mass, the nanites became sentient and started to take over their hosts, using them to spread more nanoprobes into others then linking them into the group consciousness, which began referring to itself as "The Fold".

A side effect of this connection was the sharing of superpowers over a short range, making facing groups of nanite-infected hosts a daunting one. Examples of this include Green Goblin gaining the ability to shoot symbiote-like webbing material and Venom (Mac Gargan) being able to work Green Goblin's glider during the attack on the Geffen-Meyer Chemicals plant, hosts gaining fire, ice and electrical attacks when close to low-level metahumans with those abilities and Nick Fury gaining the ability to use a number of powers from a range of the hosts.

Eventually whatever heroes were left came up with a plan to upload a shut down signal, which had been built into the probes by S.H.I.E.L.D. in case villains ever got out of control, to the world-wide data link of the nanite collective, taking down the group and paralyzing them. To this end a small strike team were sent to a nanite base located in Iceland, which acted as the hub between the American and European nanite networks in order to access the data transmission tower there.

Unfortunately Nick Fury, who had been captured by the Fold and forcibly integrated into the group mind, remained under the Fold's control due to experimental nanoprobes the Tinkerer had developed (after having been somehow infected himself); designed to allow infected hosts to retain super powers when outside the range of the original user.

After facing Fury on the roof of the transmission tower the strike team were able to pacify him long enough to transmit the shut down signal, neutralizing the Fold worldwide.

In the wake of the crisis the Superhero Registration Act, which had sparked the Super-Hero Civil War, was repealed and all heroes pardoned for their actions in defying it after the American government realized the danger the world had been placed in without heroes to save them.

Hosts under direct control of the Fold can be identified by two transparent glowing tendrils which grow out of their backs. These tendrils are usually cyan, but change color when the host has absorbed a super power to match the type of ability they now possess (red for fire, blue of ice, etc.)

The Fold nanites have a number of similarities to the Techno-Organic Virus, although their operation is different enough to make it clear that they are a completely separate entity.

Retrieved from "https://marvelcomicsfanon.fandom.com/wiki/Fold_(Earth-6109.2)?oldid=157922"
Community content is available under CC-BY-SA unless otherwise noted.