"Flight of the Iron Spider" is the ninth episode of Assemble!'s Season Six and the one hundred and fortieth episode overall.

-I can’t believe this is going to be our last Science Fair.- Ava Ayala whispered, leaning against a wall.

-Yeah, me either… But I don’t know why you act like that’s a bad thing.- Sam Alexander chuckled.

-I gotta agree with bucket-head here.- Luke Cage scratched the back of his head. -I’m not usually a fan of this kind of things.-

-We’re graduating this year… Wow, a couple years ago I couldn’t wait for this year to come but now it feels like stuff is just gonna get more complicated.- Peter Parker sighed.

-Well, you don’t have to fight a dragon at the end of this year.- Danny Rand joked.

-Hey, Mr. Parker… I was hoping you’d take a look at my project.- He handed him over a round piece of tech. -It’s based on Iron Man’s Arc Reactor… But not as efficient.-

-Relax, kid, call me Peter. I’m just a couple years older than you. I wish I could help you with your project, but I am not part of the jury.-

-Idol?- Sam laughed out loud and Ava glared at him.

-I’m flattered, but it’s not like I am Spider-Man or something worthy of admiring.- Peter shrugged.

-All Science Fair contestants get placed in their stands.- A voice said over the loudspeaker. -Professor Miles Warren will go around to grade you now.-

-That’s my cue. Thank you for your time, Mr. Parker.- The kid smiled and walked to his stand.

-Aunt May, I’m home!- Parker exclaimed, walking inside his house in Queens.

-I’m over here, dear!- She exclaimed from the living room. -You have a visitor!-

-I wasn’t expecting anyone…- Peter commented, but stopped immediately as he saw the man standing in his own house. -Mr. Stark, it’s an honor, sir.-

-Yeah, I imagine it is.- The billionaire shrugged. -Hello, Peter.- He extended his hand at the teenager.

-H-Hello…- He shook his hand, trembling.

-I was telling Mr. Stark about you, we were about to look at your baby pictures.-

-I would love to see that!- Tony smirked.

-See? Mister Stark would like that.- The woman stood up and grabbed her cane. -I’ll be back soon, I’m not as agile as I was back in the day.- She smiled and walked inside the basement.

-Does she know?- He asked. -She doesn’t sound like she does, otherwise she would have mentioned that her niece is Spider-Man.-

-Oh, c’mon, don’t play dumb with me.- Stark stepped closer to the young man. -I know your secret, friendly neighborhood.-

-I don’t know what you’re talking about.- Peter shook his head.

Tony put his repulsor gauntlet on and fired at the bottom of Parker’s bag pack, spreading all of his stuff on the floor. Between the books, they both could see the iconic red and blue suit.

-What are you gonna say about it now? Halloween isn’t anytime soon, son.-

-Okay, fine, yes.- Peter looked at the basement door. -I am Spider-Man… About the Mansion, I am so sorry… Carnage was there and we just… I didn’t mean to destroy the piano.-

-What…? Ohhh, that? I already told Cage not to worry about it.- He shrugged. -I am not here because of that.-

-This…- Stark bent over and picked up the suit. -These… Pajamas… They’re not worthy of a superhero.-

-I don’t have the resources you do… It serves its purpose.-

-What would you say if I told you I want to up your game?-

-You… You mean improving my suit.-

-Not that one, that’s beyond improvement.- Iron Man shook his head. -I meant a whole new suit of armor, keeping the Spider theme, of course. Just… Not the colors. Red and gold is better.-

-It also works as a bag pack, so you don’t have to worry about fixing the one I just destroyed.-

-Check the third cupboard door, from left to right.-

Peter walked over to where Stark told him so and opened it. Suddenly, Aunt May walked inside carrying the photo album. Parker reacted quickly and fired a web at the Spider-Man suit laying on the floor, hiding it behind the kitchen counter.

-Oh, Aunt May! Mr. Stark was telling me he is super busy! You know, saving the world and all.-

-Of course! I don’t want to cause any trouble with the Avengers.- May smiled.

-Yes, of course.- Iron Man gave Peter a killer look and the young man smiled back. Tony walked towards the door. -Thank you for your hospitality… Or whatever you say when you barge into someone else’s house.- He stepped outside and suited up, before flying away.

-Okay, here we go.- Peter said, putting the Iron Spider bag pack on. He pushed the Spider button on the back and suddenly, a suit of armor was assembled around him.

-Woah…- Peter muttered, seeing the panels around him.

-Yes, sir. One advantage of being an Artificial Intelligence is being able to be everywhere at once.-

-Wow, this is so cool.- Peter exclaimed. -What does this do?- He pushed a button on his right wrist and three mechanical arms or “waldoes” emerged out of the gold "circle" on Spider-Man's back.

-Doc Ock-based?- He wondered jokingly. He tried jumping in order to fly, but he wasn’t able to take off. -How does one fly in this thing?!- He exclaimed.

-Sir, do you want me to activate the flying mode for you?-

Suddenly, the repulsor reactors on his feet, hands and back started working, making Iron Spider fly. However, Peter wasn’t able to fully control the armor, so he crashed to the ground quickly.

Peter’s ringtone started to sound inside the armor and Ava Ayala’s picture was shown on the display.

-I took the liberty of synchronizing your phone with the armor. I hope that’s okay, sir.-

-I… I was testing something Tony Stark gave me…-

-Tony Stark as in THE Tony Stark?-

-Alright, you might want to put that on hold. Your teammates are fighting against an electrical creature.-

-Wait, don’t you need our location?-

J.A.R.V.I.S. displayed her current location on-screen, making use of the armor’s GPS capabilities.

-Mister Stark also had his difficulties with flying at first. Do you want me to take autopilot?-

-I’m here! What did I miss?!- Spider-Man exclaimed, arriving at the Intrepid.

-Finally!- Nova exclaimed, firing a blast at the creature. Then, he turned to face his teammate. -Wow, that’s a serious upgrade…-

-Oh, this? This is just a little gift by Mister Tony Stark.-

-How does it compare to a Mansion?- Luke Cage smirked, punching the foe.

-According to our database, this is Zzzax.- J.A.R.V.I.S. informed. -Product of an accident that occurred at a Roxxon Corporation nuclear power plant. Longtime enemy of the Hulk. Zzzax is a psionically charged electromagnetic field in humanoid form. Zzzax also absorbs electricity from the human brain to survive.-

-Hey, lamest villain of all!- Iron Spider held his hand up. -What’s your motivation?- Zzzax turned to him and ceased fighting for awhile.

-That’s it, big guy. Slow down.- Suddenly, the Iron Spider fired a repulsor blast at the creature, enraging it again.

-I’m so sorry, I didn’t mean to!- He held both of his hands up, and fired at Agent Venom and Iron Fist.

-Do you even know how that works?- Nova asked, flying around Peter.

-Ugh!- Ayala rolled her eyes. -Spider-Initiative, minus the actual Spider, let’s get rid of this guy!-

Iron Spider tried to jump using the waldoes, but they were stuck to the ground.

-He is almost incorporeal, but I can still harm him!- Luke exclaimed. -However, I don’t know if all of you can sustain the electrical charge.-

-I can!- Agent Venom leaped forward and grabbed his grappling hook. He fired it and grabbed the tip, tossing the gun at White Tiger. -Tiger, hold onto this! Cage, keep on punching him as hard as you can!-

Ava and Luke nodded and Flash started running in circles around Zzzax. Soon enough, the electrical being was wrapped in the grappling hook’s zip line and standing on the edge of the Intrepid, ready to fall to the Hudson River.

Cage took a couple steps backwards and then ran towards Zzzax, punching him as hard as he could. As soon as Luke’s fist hit the monster’s semi-tangible skin, Ayala let go of the gun, making the Living Dynamo fall into the water.

-Have you decided what you’re gonna do with the Iron Spider Armor?- Nova asked after the fight.

-Actually, yes. I have a pretty good candidate in mind.- He smiled, looking at the child on J.A.R.V.I.S.’ database.

-Oh my… Spider-Man knows my name.-

-And I think I can trust you with my name as well… Can I?-

-Okay… But only under one condition.-

-That you call me Peter.-

-Shhhhh!- Spider-Man covered Amadeus’ mouth. -What did I just say?!-

-I am here to give you something… Have you ever wanted to be a superhero?-

-I present you the Iron Spider Armor.- He showed the suit of armor to him. -It also works as a bag pack so you can suit up whenever you want.-

-Why don't you use it yourself?- Amadeus asked, grabbing the bag pack.

-I lack the technical ability… But I think you’ll handle it just fine.-

-That reminds me of the Yoda quote…-

Cho giggled and put the bag pack on. Then, he pressed the Iron Spider icon on his back and suited up.

-THIS IS SO COOL!- Amadeus exclaimed.

-C’mon, give the repulsor rays a try.- Peter encouraged him.

Amadeus held one hand up and fired a repulsor blast, hitting an antenna. Then he lifted the other hand and fired two blasts at once, hitting both a water tower and a chimney.

Amadeus opened his mask, revealing his face. -Thank you, Peter.-

-Also… You know what this means, right?-

-Welcome to the Spider-Initiative, Amadeus.- Parker smiled. -Now c’mon, give it a test drive around New York.-

Iron Spider closed his mask back and flew away from the rooftop. As he soared through Manhattan, he screamed in joy. 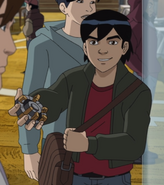 "Hey, Mr. Parker… I was hoping you’d take a look at my project."

"Doc Ock-based? How does one fly in this thing?!"

"Oh, this? This is just a little gift by Mister Tony Stark." 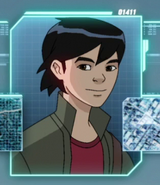 "Actually, yes. I have a pretty good candidate in mind."

"I present you the Iron Spider Armor."

"Why don't you use it yourself?"

"Also… You know what this means, right?"

"Welcome to the Spider-Initiative, Amadeus."

"Now c’mon, give it a test drive around New York."

Retrieved from "https://marvelcomicsfanon.fandom.com/wiki/Flight_of_the_Iron_Spider_(A!)?oldid=181026"
Community content is available under CC-BY-SA unless otherwise noted.