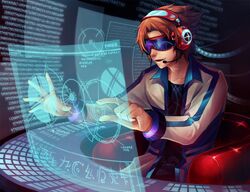 Single
Occupation
Engineer
Education
Unknown
Origin
Origin
Born with 2 Time Lord parents. The father worked as one of the High Council members, and the mother worked as an Engineer for the Aelian Engineering Team on the planet, Aelian
Place of Birth
[[Chronon]]
Creators

Only if we were just more then this. Teacher, you're one of the most decorated Chrononian officers. How did you become who you are?

--The Operator to the Teacher

Born to two parents. The father working at the High Council at Chronon, while the mother worked at the Aelian Engineering Team on the planet, Aelian. The Operator stayed with his grandmother called The Teacher who acted more then a grandmother, but a mother.

When the Operator grew into his Teenage Stage, he was working at the Chronon Engineering Site-Alpha where he worked as one of the top engineering on the energy lines connecting to the planet's core, harnessing the heat radiation from below. When he was working, his grandmother walked in to see how he was going. The Operator asked her how to be who she is now. The Teacher only said to try hard, believe in yourself, and you can do anything. When he heard this, it sparked something in him. But soon after, during his break, he was told of the death of mother by the hands of a spy of the Daleks. Feeling angered by this, he signed up for the Chrononian Military and was sent off to the planet of Gallifrey to be trained.

The Operator always wanted to see this planet. Legend has it, the deity that made the Time Lord sleeps here within the center of the planet. When he got onto the planet he placed in the Alpha Recruit Regiment to train under by the Chief Ankerian Officer, Cortez Mendez.

The Operator and the rest of the regimen was placed in a testing to test survival skills, and to analyze their combat. Placed in teams of 5. The Operator was chosen to lead Alpha Team. The survival arena was on a island called Avalon, and was placed on the south side of the island

Retrieved from "https://marvelcomicsfanon.fandom.com/wiki/First_Operator?oldid=180620"
Community content is available under CC-BY-SA unless otherwise noted.