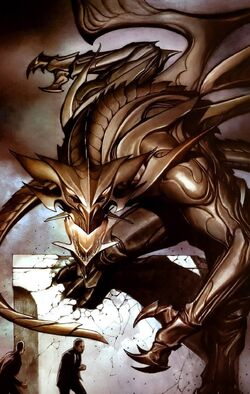 Creepy Crawler, Chinese Crytid, He Whose Limbs Shatter Mountains and Whose Back Scrapes the Sun, Project S.E.R.P.E.N.T., The Serpent, Reptoid, Chitauri Dragon
Identity

Worm! I shall roast you like a tasty pig in a hot barbecue grill!

Subject: Fin Fang Foom was the genetic hybrid result of several genetically-altered reptiles and Chitauri's gene mixed with the Leviathan gene that was accidentally created by a group of S.H.I.E.L.D. scientists located on a facility in Brooklyn, for "researching purposes" on studying and experimenting Chitauri biology. After seeing the mistake that they've made, they decided to report their actions to the superiors of the organization but one of them, out of the fear of losing his job as a S.H.I.E.L.D. scientist, decided to keep it in an unused private Leviathan cell located near their laboratory, feeding, taming, and raising the mysterious dragon-like creature that they've just created, but at some point he started abusing the creature in order to get him well-fed, causing for Foom to start hating his own creator.

Doctor Jason Quantrell, who was afraid of losing his job, was the only one who was amazed and feeling proud in his magnificent creation, and due to his appearance similar to those of an infamous mythical dragon's, he named the creature Fin Fang Foom, that translates "He Whose Limbs Shatter Mountains and Whose Back Scrapes the Sun" in the English language.

In over two months, it rapidly grew into a massive size (almost the size of a fully-grown elephant) though it still fit inside the cell, but the scientists were starting to get concerned, thinking that this creature could escape the cell soon and rampage outside the laboratory as well as devouring everyone it sees, thinking that they might have created a living biological weapon.

As a decision of the majority, they decided to exterminate the creature, the same scientist who raised him quickly went into the creature's cell and disabled its security mainframe, unlocking the cell to let the creature out and prove that it is still tamable.

The scientist let the creature out, alerting the other scientists to call the security, and just when they showed up, the scientist seemed to have tamed the enormous dragon-like beast. The scientists was starting to get relieved but the guards still told him that they should come with them for questioning about the "destructive bio-weapon" that they've created.

Before Quantrell could explain his reasons to the agents, Fing Fang Foom's red eyes went darker and started growling, signaling his extreme feeling of hunger and devours his own creator and some of the guards before getting out of the room through the laboratory, destroying several structures in the building and caused for everyone else who survived to panic and run away from the dragon, triggering the alarm, causing massive panic and destruction throughout the whole facility.

Foom manages to escape the facility and made it flying through the skies of New York until he was shot down by Mack who followed his tracks using the Night-Night Gun, crashing into the newly-reconstructed Brooklyn Bridge, months after it was destroyed during the starting events of Ultimate War and weeks after Civil War has ended.

After crashing into the Brooklyn Bridge, he went unconscious and his body was approached by soldiers who were guarding the newly-reconstructed bridge. The commanding soldier decided him and his men to shoot the creature on sight while they still can.

Mack tried to confront and stop the commander and his men from shooting but it was too late, the soldiers continuously shot the unconscious Foom, but his skin was too thick and durable due to his physiology and the metallic skin he got from the Chitauri and Leviathan gene.

The dragon suddenly woke up and went berserk, devouring the commander and the most of his men before diving into the depths of the water, escaping capture before more S.H.I.E.L.D. operatives have arrived to investigate the scene. Little that they know, that Foom was heading straight into the larger city of California, finding more creatures to feast on and satisfy his extreme appetite and hunger.

As the monstrous dragon lands at the shores of Manhattan Beach, it caused nothing but panic and chaos towards everyone that immediately have gotten the attention of Tony Stark himself, who was actually in vacation at the time back in his mansion, in Malibu. Stark then suited up his Iron Man suit and arrives at the scene to intervene the raging Foom. They fought and fought for a few hours in the beach to prevent Foom from getting into the city, but eventually the dragon got tired and manages to brutally destroy all of Tony's back-up suits that he used as an assistance during their battle and even injured Tony himself after coincidentally throwing him back into his own mansion, before going straight into the city to cause large terror and the hunt for his feast.

Thankfully, S.H.I.E.L.D., led of course by Phil Coulson manages to arrive in time with the newly-specialized serum recently developed by Leo Fitz and Jemma Simmons in order to take down the serpent and have it imprisoned once again, since killing it would be very risky after all. Tony Stark then thanked S.H.I.E.L.D. for saving the day from the Dragon's clutches, advising the authorities to have it remain its custody on S.H.I.E.L.D.'s hands, in order to understand it more instead of just examining and experimenting on it, some kind of a tortured lab rat.

In later events, it was frequently shown that Fin Fang Foom has continuously been given a proper treatment as a living creature, as its current tamers and trainers have started training Foom in combat and self-defense inside his recently-modified enclosure. At first, several heroes might have thought of this as a method of empowering a biological weapon so S.H.I.E.L.D. could have its hands on the sacred creature through enslaving it, this was then proven to be false, later on after Curtis Conners finally questioned their truest intentions on Foom.

In response to this suspicions, Coulson corrected their misunderstandings, implying that S.H.I.E.L.D. did this as an act of raising a normal living, but quite dangerous organism. They had it under control, and were only doing the best that they could to keep Foom satisfied in his enclosed cell. Ridiculous as it sounds, Foom eventually appreciated this treatment, since he was finally been given a proper enclosure similar that extremely suits his suitable and comfortable habitat. On his time being taken care of the organization, he started to have a friendly bond with both his closest trainers, Leo Fitz and Jemma Simmons, seeing them as the creature's most trustworthy allies inside the facility.

However, all the efforts and all the endeavors that S.H.I.E.L.D. had to offer Foom in keeping him safe and comfortable in his enclosure, eventually came to an end, as tragedies struck at the worst time. During the days of the Mutant Ultimatum, the very S.H.I.E.L.D. facility where Foom was enclosed in was suddenly raided by the anti-mutant mutate Mister Sinister and his unstoppable forces of blood-thirsty clones. As they rapidly racked the whole entire place into ruins, they also managed freeing all of the facility's prisoners in the process, including Foom.

Surprisingly, Foom was the only prisoner inside the facility who never had the slightest thoughts or intentions of escaping the prison with the others, but instead of it, he attempted defending the facility from Sinister as the villain searches for the secret elements into perfecting his conducted experiments, such as his cloning recipe and the final ingredients in creating a more lethal dose of the Legacy Virus. Foom fought off all the clones that he could, until he was eventually taken down by Sinister, after he failed trying to take the villain down by himself.

Defeated and temporarily paralyzed by Sinister, the creature had no other choice but to cry a mighty and powerful roar at Sinister. The roar was so loud and powerful, it manages to be heard by many across miles away. His shriek even killed the remaining clones of Sinister, however the villain himself remained untouched by the creature's powerful ability. Following the creature's defeat, Sinister placed his palm on the creature's forehead, where he entered his state of mind in order to communicate with Foom. Foom tried to resist Sinister's telepathy but immediately failed, where Sinister tried to convince Foom that he is already free from S.H.I.E.L.D,'s abusive clutches.

Foom was confused on why Sinister would think that S.H.I.E.L.D. was an abusive group, where he continued defending them from Sinister, pointing out that villains like him are the true abusive ones. Sinister ridicules Foom, as he had begged to differ by projecting the visions in Foom's mind during the days of the actual truth, where Foom eventually knew, that the very purpose S.H.I.E.L.D. told him, was a big lie all along. Realizing that Foom's original purpose of existence was just an experimented weapon all long, Foom enrages once more as the creature, unusually, breaks down in tears, after realizing that he was living a lie.

By the time Fitz and Simmons and their team had arrived in the area, they immediately tried to attack Sinister, but as usual, he immediately escaped the scene after he finally took the specific ingredients that he needed. Following the aftermath of the destruction of the facility, Fitz and Simmons ran at a lying Foom to make sure if he's okay. However, unbeknownst to them, Foom unexpected rises up and roars at them with fury, after finally knowing the truth about his existence. Foom argued with the both of them telepathically about what Sinister revealed to him, where they tried to tearfully explain everything else that Sinister haven't told him yet, until it was too late.

Spreading his massive wings from his back, a disheartened and furious Foom flies off away from his most trusted allies, where he eventually disappeared from their sight during that very moment. S.H.I.E.L.D.'s operatives tried to continue their search for Foom's whereabouts, but they just couldn't find any traces of where he went. Unknown to them, Foom eventually found his way into Antarctica, where he eventually finds his way entering the exact portal that led him to enter Earth's lost paradise, the mysterious Savage Land. There, comes the arrival of what's about to come next in Foom's life as he starts a new journey in his life, a journey of his own.

Chitauri/Leviathan/Reptilian Hybrid Physiology: Foom possesses various superhuman attributes common from the Chitauri and from several genetically-altered reptiles experimented by S.H.I.E.L.D., turning him into a sentient dragon-like creature. Foom has the ability to speak both Chitauri and Human language, but can only communicate it through his ability of telepathy, a power he gained from the DNA of a genetically-altered lizard who had given the same powers due to genetic experimentation.

Retrieved from "https://marvelcomicsfanon.fandom.com/wiki/Fin_Fang_Foom_(Earth-61615)?oldid=255332"
Community content is available under CC-BY-SA unless otherwise noted.