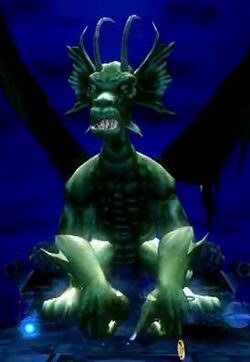 Little is known about Fin Fang Foom's life before the formation of the Masters of Evil. It can be assumed to be similar to his mainstream counterpart.

When the Ultimate Alliance made it to the Engines of the Helicarrier, they were confronted by Fin Fang Foom. He told the Alliance that it was hopeless to fight him and started to fly around, attempting to kill them. However he was shot with a turret multiple times and then possibly fell to his doom.

Foom is highly experienced with and in the use of the advanced technology of his home planet. He is an accomplished and proven spacecraft navigator and has proven himself to be an excellent hand to hand combatant. He has mastered the fighting style of his people, which happens to be identical to a number of Asian martial arts.

Foom is extremely vulnerable to an unidentified herbal leaf found only in China. This herb is capable of quickly putting Foom to sleep for extremely long periods of time, perhaps indefinitely, as long as it remains in his general vicinity.

Fin Fang Foom drops Dragon Heart after his defeat. This is a clue that he didn't survive his fall.

Retrieved from "https://marvelcomicsfanon.fandom.com/wiki/Fin_Fang_Foom_(Earth-6109.2)?oldid=255331"
Community content is available under CC-BY-SA unless otherwise noted.