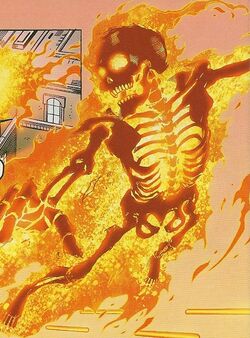 No Eyes, has empty eye sockets through which he can still see
Hair

Fever Pitch's history is identical to that of his Earth-616 counterpart up until Juggernaut was launched into space by Skaar. He was one of the villains defeated by the combined duo of Sandman and Juggernaut. His flame was extinguished by the duo, transforming him into an ordinary skeleton.

Fever Pitch currently has no powers. Formerly, his body was covered in organic flame, rendering him able to radiate incredible heat, fly, and discharge blasts of explosive plasma.

Retrieved from "https://marvelcomicsfanon.fandom.com/wiki/Fever_Pitch_(Earth-858)?oldid=256267"
Community content is available under CC-BY-SA unless otherwise noted.