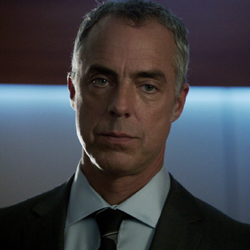 Felix Blake (b. 12 March 1961) was an agent of S.H.I.E.L.D.. Following the Battle of New York, he became involved with the containment and capture alien technology, taking a particular interest in a case where a masked couple embarked on a string of bank robberies armed with an alien weapon. Agent Sitwell was dispatched to bring in the pair, and returned with both of them in tow. Much to Blake's bemusement, Claire Wise was left in his care, and he was at a loss to find any tasks for her that were within her capabilities.

Blake would soon after receive Level 7 clearance and learnt that Phil Coulson had survived the his attack during the Battle of New York. Blake was Agent Phil Coulson's contact when Coulson's team retrieved a Chitauri Helmet infected with an alien virus. When Blake relayed S.H.I.E.L.D.'s orders to dispose of Coulson's infected team-mate Jemma Simmons, Coulson pretended not to receive the order on the chance that Simmons could perfect her own cure.

Afterwards, Blake arrived on the Bus to take the Chitauri helmet away to a secure S.H.I.E.L.D. facility, he claimed that Coulson's excuses for not speaking to him were foolish and obvious as there were other S.H.I.E.L.D. Agents listening to the conversation. He warned Coulson that if he continued to pull such stunts, the higher-ups at S.H.I.E.L.D. could take his team away from him - whether he liked it or not. Coulson seemed surprisingly confident however and Blake remarked that he didn't sound like the Phil Coulson he once knew. As Blake left he gently touched Coulson's car Lola.

Agent Blake was called to the Bus from a S.H.I.E.L.D. Aircraft Carrier by Phil Coulson. As the Bus flew over the North Pole, Coulson had a meeting with Blake that also included Agents Victoria Hand, Jasper Sitwell, John Garrett, Antoine Triplett, Grant Ward and Melinda May to discuss a plan to learn the identity of the Clairvoyant using Index rejects. Blake was skeptical about the idea of there being a real Clairvoyant. Blake later witnessed Skye become a Level 1 S.H.I.E.L.D. agent.

As part of the plan, Blake was randomly chosen to be May's partner as they investigated whether Thomas Nash was the Clairvoyant. As they walked together, Blake asked May what her zodiac sign was, trying to learn why the two of them were selected to work together, May reminded him that the choice was completely random. The two went to Tranquility Bridge, an assisted living home in Macon, Georgia, when they arrived Blake was unimpressed and asked if they were here to talk to a doctor rather than a patient.

While in the facility, Blake was attacked by Deathlok. During the battle, Blake fired a full round into Deathlok's chest, which seemingly had not effect, he was able to shoot a tracker in Deathlok before being strangled. Blake attempted to explain to Mike Peterson that he could still be saved and that he had a son that missed him. Deathlok responded that Mike Peterson was dead, and then threw Blake against the ground and veritably caved in Blake's abdomen with his prosthetic leg, May was able to defend herself and Deathlok escaped.

Blake was brought to the Hub to receive medical attention. His condition was described as critical. It is assumed that he was then moved to a S.H.I.E.L.D. Trauma Facility. His current condition is unknown due to the HYDRA infiltration which most likely penetrated all S.H.I.E.L.D. hospitals.

When Agent Antoine Triplett saw Jemma Simmons hide her research on GH.325 from him, he told her that Blake got his ribs caved-in, and his blood would be on her if she did not share her research.

Agent Blake had his suspicions about HYDRA infiltrating S.H.I.E.L.D. and told Victoria Hand that he believed Phil Coulson's team were double agents because of their disrespect for S.H.I.E.L.D. procedures. Blake and Hand kept their doubts to Coulson's loyalty secret, even though Blake was injured, until the S.H.I.E.L.D. Civil War began. This led Hand to order the death of Coulson's team.

Sadly, Deathlok's attack left Blake a paraplegic with a deep hatred of enhanced individuals. After learning of Hydra's infiltration of S.H.I.E.L.D., Blake went into hiding for the next two years, before eventually emerging as the leader of an anti-Enhanced hate group called the Watchdogs. However, he communicated with them via hologram, in order to hide his wheelchair. He supplied them with weapons, such as Nitramene. With secret arms backing from Hydra, and the promise of the destruction of all superpowers, Blake organized cells of Watchdogs across the USA.

Blake suffers from spinal damage as a result of his injuries at the hands of Deathlok. As a paraplegic he lost the ability to walk.

Retrieved from "https://marvelcomicsfanon.fandom.com/wiki/Felix_Blake_(Earth-1010)?oldid=194284"
Community content is available under CC-BY-SA unless otherwise noted.