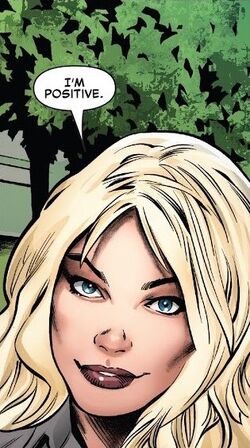 My dears... Just wanna remind ya' that my loving luck never runs out. Just come back to me and I'll give ya' some, capiche? I love you...

Before the years of Ultron Revolution, the Black Cat seemed to have the same history with her Earth-61615 counterpart, until Ultron started an all-out war against humans and those who dares to oppose him and his ideologies.

Between the first and second year of Ultron Revolution, Felicia and her former flame Peter Parker, Spider-Man, ended up surviving by residing inside the underground New York Megacity built by the Stark Family among millions of other survivors. Desperate and longing for someone to bond with, the two old flames rekindled their relationship, initially as friends, only to go off the rails one night when a heat of the moment urged the two to engage in a passionate intimacy. The next day followed, and unfortunately, a mourning Peter decided that they remain friends that moment on forward, much to Felicia's dejection which she tried to hide, especially after she found out days later that she was pregnant, worrying how she would deal with the sudden situation. Peter himself eventually found out through Felicia herself, which overwhelmed him just as she was and became accepting on the fact that he's going to be a father, but still remained his stance on their relationship, keeping themselves professional and friendly for the next nine years, which Felicia had to painfully accept.

After witnessing the birth of her twins, Ben and Ashley, Felicia was conflicted to give up her mantle of the Black Cat to carry a greater responsibility than just herself and her one-sided love interest: their children, in which she mostly became a mentor and trainer for youngsters at S.H.I.E.L.D. who were willing to fight on the outside world against Ultron, despite being reluctant at first. Throughout the later half of the global reign of Ultron, the Black Cat became one of the trainers for her friend and that her children's father Spider-Man's protege and mentee that was Miles Morales, which made her be more fond of and be friendlier with children and teenagers, especially that she had two of her own during what she and most people thought was the beginning of the end of the world.

Days before the long-time war against Ultron ends, Felicia and the rest her tactical stealth team were sent in their final mission decrypting the defensive units of Ultron's Sanctuary. During the final days, Felicia wanted to tell that she still has lingering prolonged feelings for him even after a decade has passed, but both of them were to focus on the last battle against Ultron on the Sanctuary that she suppressed what she was feeling for now, bitterly hoping that she could forget about it since she pessimistically believed Peter would end up rejecting her, despite the fact that they already both have children. After the modest and selfless sacrifice of those who were willing to gave up their lives so that the others can successfully finish the mission, Felicia was one of the others who made it towards the very end, getting the chance to live and see another day with her husband and children.

In the aftermath of Ultron Revolution, both Felicia and Peter, surprisingly still alive and together despite not being in a committed relationship, mutually confessed and committed their long-time love for each other, finally deciding to get married as the married couple they and their children wanted to be. Looking at on that day, Felicia thought was lucky, but unbeknownst to her Peter had always felt the same about her, if not more. As a newlywed couple, Peter had the thoughts on retiring as Spider-Man once and for all, in order to spend more time with his wife and children.

Besides raising and living with her teenage children, Felicia eventually grew tired of having to not do anything productive, unlike her husband who still swings and patrol around the city from time to time as Spider-Man while guiding his successor Miles Morales for the last time. In order to suffice her boredom, Felicia remembered how fitted and talented she was as a private investigator back in the day, which conveniently made her decided to revive her once lost career into her livelihood in her forties by finally bringing back her Cat's Eye Investigations which specializes in bodyguarding, background checks, bounty hunting, and installing burglarproof security systems, which Felicia herself humorous thought was ironic due to her past. Her business ended up being associated with the quieter yet just as efficient, Alias Investigations which was owned by her fellow Defender, Jessica Jones, to avoid any form of "competition" between their investigative local businesses.

Felicia was one of the certain heroic individuals who survived the following mysterious assassination and attempts of vigilantes across New York since Felicia had since retired from her vigilante works after she first conceived her children in order to take care of them in their childhood, though her husband Peter have finally come terms into having his days as heroic figures and individuals into a closure as Spider-Man, leaving the flames of their legacy to their oldest and closest heroic friends, most notably Ben and Ashley, their son and daughter who would also take their places as the two new web-slingers in town, the Scarlet Spider and Spider-Woman, while the Spider-Man mantle was succeeded by the young adult Miles Morales, as Peter and Felicia had both properly trained him in the past during Ultron Revolution. In the aftermath of the silent slaughter of heroes in New York, Felicia along with Jessica Jones and Luke Cage were determined to help former assassin-turned-hero Elektra after finding out that her husband and their former teammate Matt Murdock (Daredevil) didn't survive the attack, which led them to cooperatively investigate who the killer might be.

During society's recovery from the Great Technological Depression, Peter and Felicia were supportive of former General Thunderbolt Ross as they voted for him to be the country's president during the election, but were bitterly against the New World Order introduced by Vice President Edward Stark (Tony Stark's diabolical son) in the form of H.A.M.M.E.R.'s Empire, S.H.I.E.L.D.'s darker inevitable replacement. When her children voluntarily fought against the Empire using their newfound powers. Felicia sensed the courage and preparedness in signalling her approval but didn't openly admit it at first, since Peter was overtly strict to let the two patrol the dangerous streets governed by fascist and authoritative operatives due to his protectiveness.

However, thanks to Felicia's convincing perspective, she convinced that Peter to listen to their children now that they're grown up and could make some decisions on their own, instead of being to authoritative. In the end of their family feud, Peter was finally convinced by the two young Parkers as he listened that they're ready to help out others as vigilantes while bring down Stark's tyranny by joining the secret resistance until peace through victory is achieved, eventually granting them her and Felicia's granting blessing to be the next line of heroic spider-themed vigilantes. As her adolescent children joined the fight against the Empire, Felicia also helped being one of the individuals who secretly gathered intelligence and other information for the Resistance, which proved to be essential despite not participating in field to fight H.A.M.M.E.R.'s menacing forces. After almost five years, the Resistance were victorious, ending another reign of terror caused by one of Earth's greatest minds, and with the it, peace and liberty was restored throughout the rest of the entire world, for now, thanks to the help of these heroes including Felicia's assistance alone.

When the multiverse was doomed into its accelerated destruction by cosmic incursions of the Beyonders and was recreated in the form of Battleworld, anyone who didn't escape the incursion of their planets through any means at the time of the Earth's destruction has unfortunately perished in the cataclysm, including Felicia and Peter, who were last seen outside the porch of the Parker Residence, holding each other in a loving embrace as they watched the other neighboring Earth collide with their own, accepting their fates.

After the restoration of the Multiverse at the hands of the benevolent Beyonder in order to compensate the disastrous and convoluted Secret Wars, Felicia and Peter along with the rest of Earth-61616's surviving residents would later resurface in her own native universe, which was eventually brought back to existence together with the rest of the Multiverse, most notably after the heroes of the mainstream reality were able to banish Nightmare from this reality, preventing him from taking over Earth-61616 and making it his realm of darkness. Living once more with his family, As everyone else who came back to life, Felicia went on to live her life of pseudo-retirement a skilled investigator for her own Cat's Eye Investigations, helping civilians and the authorities alike solve crimes.

While she knew that her children were displaced as they lived their new lives in the mainstream reality of Earth-61615, Felicia was still grateful that her now grownup children could still visit him and their mother every once and a while whenever they get the chance to visit their original reality through the Baxter Building's multiversal portal, although she sometimes miss them a just little bit too much that she once sneakily went to the prime reality to visit them, only to be talked out and retrieved by her husband back home, reminding her that they'll be visiting the following weekend, much to her annoyance for failing to satisfy her innate curiosity on exploring the other dimension, secretly hoping to see her alternate, less younger self.

Transportation: Seemingly those to Felicia Hardy of Earth-61615.

Retrieved from "https://marvelcomicsfanon.fandom.com/wiki/Felicia_Hardy_(Earth-61616)?oldid=266868"
Community content is available under CC-BY-SA unless otherwise noted.