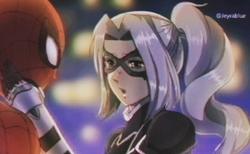 I used to steal to survive... I knew what it was like to have nothing, and fighting like hell to get whatever you can. I never want to live that way again. I believe in second chances, and so should you.

Felicia Hardy became the cat burglar known as the Black Cat when she was 17-years-old, following in her father's footsteps. She eventually dropped out of Midtown High to become a full-time thief in the employ of Wilson Fisk, who had her experimented on to give her powers, which started to draw attention her way.

Particularly, the vigilante known as Spider-Man, who she didn't know was her former teammate, Peter Parker. Spider-Man and the Black Cat quickly formed a unique relationship, similar to a cat and mouse, though who was who would often be anyone's guess. They would, however, inevitably discover the truth about who the other one was.

Knowing the truth forced them to take a deeper long into their relationship, and it caused Felicia to take a deeper look into herself. Over time, the two were able to truly fall in love, and agreed to work together as a crime-fighting duo, and they even got engaged.

But there would never be a wedding. Spider-Man's old enemies would eventually be his downfall, when Eddie Brock bonded with the Venom symbiote once more, and formed his own iteration of the Sinister Six, consisting of Molten Man, Lizard, Electro, Kraven the Hunter, and Hydro-Man.

Spider-Man and Black Cat found themselves sorely outmatched against this new Sinister Six, and sorely lacking in allies, following the deaths of their friends the Prowler, Daredevil, and Morbius, as well as the Avengers being trapped elsewhere in space. The two of them were truly on their own.

They fought valiantly and were even able to buy themselves enough time to reverse engineer a cure for the Lizard, reverting him back into Curt Connors. He could have been some help, had he not been immediately fried to a crisp by Molten Man. However, it was Black Cat's quick thinking that enabled them to pit Molten Man and Hydro Man's powers against each other, taking them both out of the fight. But it was already too late. Venom had torn off Spider-Man's arm, and was holding him by the throat, literally prepared to eat his brains.

Black Cat begged him not to with all of her heart, tears pouring from her eyes. Venom itself seemed to hesitate, remembering how fond it had been of Peter during their own bond. But Eddie Brock's hatred was too strong, and he snapped Spider-Man's neck right before her, tossing his body at her feet.

She barely had any time to mourn, as Kraven the Hunter grabbed her by the ponytail, and placed a dagger across her throat. He asked Venom what to do, and Brock told him to kill her, but to make it hurt. Felicia tried to fight back, but Kraven was too strong. He stabbed her through the stomach, and Electro decided to join in on the "fun", as he put it, by zapping the blade, electrifying Felicia's entire nervous system.

Seemingly blacking out, the next thing Felicia knew, she had been plucked from her reality by a being known as the Silver Sentry, who recruited her onto Team X. While on this team, she was made teammates with an alternate version of Venom. However, his host was not Eddie Brock, it was rather Peter Parker's brother, Patrick, who did not exist in her home reality. Initially, the two had a very antagonistic relationship, but over time it became clear to Felicia that the Venom symbiote longed to be good, and that Patrick himself did too.

For a time, they had gotten into a nice groove of working alongside their team, and essentially becoming parental figures towards the team leader, Spider-Girl. But eventually, they encountered a mission that ended in Spider-Girl's brutal death, and Venom found himself unmotivated with the mission. Allowing them a relieve from the team, Black Cat accompanied Venom back to his home reality, feeling she no longer had a place in her own. Since then, the two have gotten married and begun working side by side in honor of both Peter and April.

Retrieved from "https://marvelcomicsfanon.fandom.com/wiki/Felicia_Hardy_(Earth-29)?oldid=262646"
Community content is available under CC-BY-SA unless otherwise noted.