Marvel Fanon
Register
Don't have an account?
Sign In
Advertisement
in: Characters, Templated Articles, Known to Authorities Identity,
and 25 more 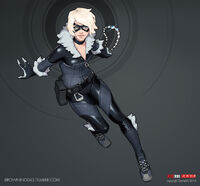 Felicia was the daughter of renowned cat burglar Jack Hardy. Jack trained Felicia in everything he knew so she could fend for herself when she grew up.

Eventually, Felicia would take after her father and become a greater thief than he was, calling herself the Black Cat. The Black Cat would eventually begin working for Roxxon Corporation.

In 2014, Roxxon spies had reported that Norman Osborn was attempting to replicate the Super Soldier Serum and had created a prototype and infused it with a spider. The CEO of Roxxon would then order her to retrieve the spider to which she successfully did. Until she encountered the vigilante Daredevil.

She attempted to flee from him but he caught up and the two engaged in a fight. Their fight eventually found its way to the streets where a teenager witnessed the whole fight, Daredevil knocked the object she stole out of her bag where the teenager, believing he could help, took it and ran away. Black Cat attacked the boy and before she could hurt him Daredevil attacked her once more. Black Cat attempted to flee and Daredevil followed only to realize she had escaped.

Equipment: Black Cat's Costume: The costume she currently uses was designed by the Roxxon Corporation, created using leather material, and is designed to increase many of her natural physical attributes far beyond normal human levels by means of micro servos embedded into it.

Equilibrium Earrings: Felicia wears earrings obtained by the Tinkerer that interact with the balance centers of her brain to grant her enhanced agility and balance, increasing her natural bodily equilibrium and allowing her to accomplish feats beyond the capabilities of the finest human athlete.

Electromagnetic Contact Lenses: Felicia wears contact lenses obtained by the Tinkerer that allows her to see in various ranges of the electromagnetic spectrum, such as infrared and ultraviolet light. When wearing these contacts, Felicia's eyes appear to have blue irises as opposed to the green irises that Felicia naturally possesses.
Transportation: The Black Cat has a miniature grappling hook device hidden in the "fur" of each glove, designed by her father Walter Hardy, which enables her to swing from buildings in a manner similar to Spider Man and Daredevil despite lacking the associated speed of either. She can also use the cable from this device as a tightrope, wall scaling device, swing line, or as a weapon in combat.
Weapons: None known.