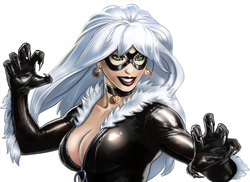 American
Occupation
Thief
Education
High School
Origin
Origin
Determined to continue her father's legacy – or perhaps for other, less obvious reasons – Felicia has since dedicated her life to following in her father’s footsteps.
Place of Birth
Queens, New York
First appearance
Doctor in the House

Born in Queens, New York, to a privileged and wealthy family, Felicia Hardy led the ideal life growing up, as a popular cheerleader and respected athlete who still managed straight A's in all her classes. But her family had a dark secret – the Hardy fortune was a result of her father’s career as a notorious cat burglar.

Making plenty of enemies on both sides of the law, he disappeared under mysterious circumstances when Felicia graduated high school. Determined to continue his legacy – or perhaps for other, less obvious reasons – Felicia has since dedicated her life to following in her father’s footsteps.

Felicia trained for years, until she felt she was ready to become the ultimate thief. Her obsession paid off – before long, she’d find that her sharp wit and seductive allure gave her an edge over the competition, landing her in circles that even her father, a master thief, could never have hoped to breach. What's more, after three years of consistently brilliant jobs, she still managed to elude all authorities (as well as other, less law-abiding figures on her trail). But her luck is about to change...

Felicia has been declared legally insane and imprisoned in the Beloif insane asylum. She was accidentally freed by the actions of Spider Man when he went to get doctor Curtis Connors to create a antidote to the cross species plague, sadly he couldn't stop her at the time.

Felicia went on to recruit a small army of mercenaries and thugs and used them rob St Gabriel's bank. Spider-Man responded to the break in first by taking down Felicia's hired army and then confronting Felicia herself. However she had a escape plan in place, having arranged for one of her men to crash a subway car into the bank vault providing a convenient escape tunnel.

Spider-Man tracked down Felicia and she soon proved herself to be no pushover, countering Spider-Man's super human abilities with technologically advanced weapons and impressive stealth skills though she was eventually defeated. Captured by Spider Man she attempted to earn his sympathy, while he carried her to the police, in order to learn how he got his powers by claiming that she is completely sane and was wrongfully imprisoned by powerful enemies she's earned.

Fortunately Spider Man was not fooled and the information Felicia was able to learn was that Spider Man gained his powers in a Oscorp experiment and afterwards was handed over to police custody. Based on a crime scene at a trio of jewelry stores she seems to have already escaped from police custody and left flirtatious note for Spider Man.

Without the public knowledge of her Black Cat persona, Felicia works for OsCorp as Norman's secretary.

Equipment: Black Cat's Costume: The costume she currently uses was created using leather material, and is designed to increase many of her natural physical attributes far beyond normal human levels by means of micro servers embedded into it.

Equilibrium Earings: Felicia wears earrings obtained by the Tinkerer that interact with the balance centers of her brain to grant her enhanced agility and balance, increasing her natural bodily equilibrium and allowing her to accomplish feats beyond the capabilities of the finest human athlete.


Electromagnetic Contact Lenses: Felicia wears contact lenses obtained by the Tinkerer that allows her to see in various ranges of the electromagnetic spectrum, such as infrared and ultraviolet light. When wearing these contacts, Felicia's eyes appear to have blue irises as opposed to the green irises that Felicia naturally possesses.

Retrieved from "https://marvelcomicsfanon.fandom.com/wiki/Felicia_Hardy_(Earth-1010)?oldid=100010"
Community content is available under CC-BY-SA unless otherwise noted.