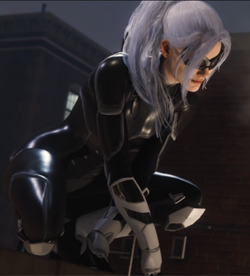 Go ahead and kill me. I've got nine lives to spare.

For her entire life, Felicia Hardy always had everything handed to her on a silver platter. Her father, Walter, had amassed a fortune as the Cat Burglar, which was only expanded upon by her mother, Anastasia's business ventures. Eventually, Walter went on the run so his family wouldn't be connected to his crimes, but all Felicia understood was that he abandoned them.

She eventually discovered his old lair full of burglary equipment. She fashioned a new suit for herself and decided to become the new Black Cat. She wasn't in it for the money, she just needed something to make her feel alive. However, she eventually discovered she found joy in stealing from her family's company, and leaving the spoils at orphanages and homeless shelters.

Despite her good intentions, her thievery attracted the attention of the vigilante Spider-Man. The two of them battled, but found themselves almost instantly attracted to each other. Spider-Man then began to think he could redeem Black Cat, which she played into because she thought his sense of righteousness was cute. However, she had no intention of stopping, because she viewed what she was doing as noble and necessary.

This conflict of ideals eventually got in the way of their relationship and they parted ways, despite still feeling strongly for each other. She continued acting on her own, but he constant stealing from Hardy Worldwide eventually caused them to hire the Heroes for Hire to investigate.

She found herself crossing paths with Luke Cage and Jessica Jones. After a brief confrontation, they came to understand her reasoning and proceeded to offer her a job with the Heroes for Hire. Enticed by the potential, she decided to give it a try, believing that do good as part of her job, and simply donate her paychecks to help people in poverty.

Retrieved from "https://marvelcomicsfanon.fandom.com/wiki/Felicia_Hardy_(Earth-101)?oldid=248359"
Community content is available under CC-BY-SA unless otherwise noted.