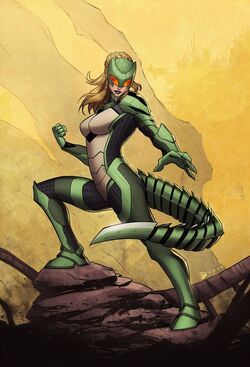 Felicia Hardy was once the thief known as the Black Cat who attempted to redeem herself as a vigilante fighting alongside Spider-Man. The two eventually fell in love, but their relationship was never easy.

Following Thanos's takeover of the planet Earth, Felicia and Spider-Man dedicated themselves to each other, and before going on to join the Resistance, they broke into the Tinkerer's old lab, where Felicia outfitted herself with a new version of the Scorpion armor, as Mac Gargan had died in the Outrider purges.

Retrieved from "https://marvelcomicsfanon.fandom.com/wiki/Felicia_Hardy_(Dimension_0)?oldid=263456"
Community content is available under CC-BY-SA unless otherwise noted.