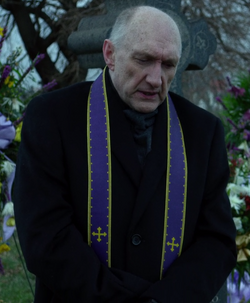 But nothing drives people to the church faster than the thought of the Devil snapping at their heels. Maybe that was God's plan all along. Why he created him, and allowed him to fall from grace... To become a symbol to be feared... Warning to us all, to tread the path of the righteous.

Father Lantom was the priest of Saint Patrick's Cathedral, where Matt Murdock went to confess. He was also the priest running the latest in a series of churches where Cloak and Dagger resided. When Cloak was accused of attacking Dagger, Cloak sought the aid of the Runaways in Los Angeles, bringing them to New York. Father Latham looked after Molly Hayes, the youngest of the Runaways, while the bigger kids searched for Cloak's imposter.

He once told Matt about how he worked in Rwanda around the time of the genocide, he knew an elder respected by both the Hutu and Tutsi, whom no one would harm. Then one day, a commander of the Hutu militia met with the elder. After talking for a few hours, Lantom and the whole village saw the commander brutally killed the elder.

Retrieved from "https://marvelcomicsfanon.fandom.com/wiki/Father_Lantom_(Earth-1010)?oldid=192613"
Community content is available under CC-BY-SA unless otherwise noted.