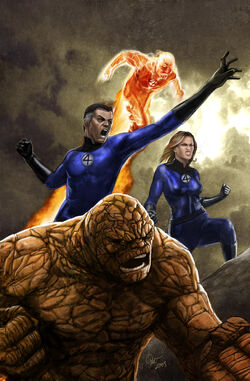 Over a decade ago, the U.S. government, under the auspices of the Directory of Mainland Technology Development, began gathering international child prodigies at a Manhattan laboratory facility in the Baxter Building, giving them the best resources and teachers the project could afford. Headed by scientist Franklin Storm and the U.S. Military's General Ross, the project discovered the N-Zone (short for Negative Zone), an other-dimensional space which paralleled our own.

Reed Richards enters a Think Tank in the Baxter Building along with Sue Storm her father Franklin Storm, one of the caretakers, her brother Johnny Storm, and Victor von Doom. He started in the think tank trying to create a teleportation device and joined work with Victor to get better results. When they had finally acquired results that seemed promising they tried it out.

Ben Grimm, a long-time childhood friend of Reed got a chance to see the launch with the four of them. The five of them were side by side trying to teleport an apple but the five got teleported instead. The teleportation consisted of going through the Negative Zone and the moment the five entered the N-Zone (a strange reality and alternate dimension where the teleportation takes place as a mediator). Along with it, a brutal cosmic ray storm had battered the crew as they were on the alternate dimension, drastically affecting their DNAs, which gave them superpowers in the process.

After returning back to their reality, they would later band together battling extraterrestrial-related threats coming from the anomalies of the Negative Zone, including their own old friend Victor who went insane and obsessed with power after gaining superpowers as well, becoming the ultimate villain and the ruler of the Kingdom of Latveria known as the self-proclaimed Doctor Doom. The four eventually named themselves the Fantastic Four to the very public, dedicated to the use of their powers for the safety and overall benefit of humanity.

Throughout their first known adventures as the quartet heroes, they've come to encounter and made trustworthy allies, not only on Earth, but also throughout the unknown regions of the cosmos, such as the Earth's mightiest heroes themselves the Avengers, along with the rest of the Ultimates, their situational ally Emperor Namor, the King of Wakanda Black Panther, the clandestine Inhuman family House of Agon, and the noble Cosmic Surfer Norrin Radd.

However, just as the four's never-ending journey endures and continues from time to time, more and more threats have sensed their presence at the same time besides Doom, including the likes of the Negative Zone's dictator Annihilus, the Devourer of Worlds Galactus, the mad genius Mole Man, and the mysterious distant relative of Reed & future time-traveler, Kang the Conqueror, and the evil organization consisting of geniuses, simply known as the Intelligencia.

However, despite the countless of times the quartet had to face each their adversaries through the years, even they would eventually come to a realization that their might and efforts as heroes alone were not enough to thwart the next following threats the heroes themselves couldn't have handled. And in that case, the Fantastic Four had to join forces with their worst enemies, specifically during the chaotic days of Ultimate War, when Doom himself came for their own help in his mission on defending Latveria and the rest of the world from the incoming extraterrestrial forces that were proven to be far more deadlier than the Chitauri back in New York, the Skrulls.

Due to this, the four had no other choice but to ally themselves with the dictator and villain, but not before they also came into contact with two of their old monarch friends, T'Challa and Namor, followed by the voluntary assistance from their on-and-off enemy Mole Man, whose main reason was to protect his Subterranean Kingdom from getting attacked and devastated by the Skrull colonizers. During their momentary alliance, the heroes and villains alike combined all their strength and efforts to fend of the alien forces during the climatic and penultimate battle of Ultimate War, to which they eventually succeeded in doing so at the very end.