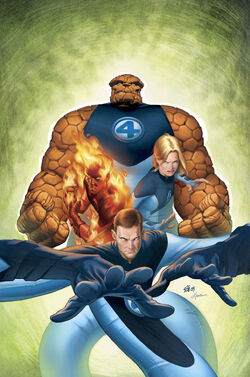 In 2011, After going off into space and being caught in a storm of cosmic energy the five astronauts, Reed Richards, Victor Von Doome, Susan Storm, Ben Grimm and Johnny Storm returned to Earth with amazing abilities. After Victor went insane and went on a rampage claiming he had the powers of "God", the four battled him and Susan was forced to kill her fiancee Victor. After Victor's funeral Johnny called the rest and proposed they form a team to protect the Earth claiming it would be "awesome". They accepted and named themselves The Fantastic Four.

In 2015 after Susan Storm fell pregnant with the twins Franklin and Valeria, the team disbanded due to Reed and Susan now having new responsibilities. In 2038 a successor team consisting of their children was formed; The Fantastic Five.

Retrieved from "https://marvelcomicsfanon.fandom.com/wiki/Fantastic_Four_(Earth-1315)?oldid=54813"
Community content is available under CC-BY-SA unless otherwise noted.