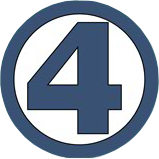 Reed Richards, a brilliant but timid and bankrupt scientist, is desperate to get funding for a space mission to study a cosmic storm, approaches multi-millionaire industrialist Victor von Doom. Victor agrees to let Reed and his friend Ben Grimm use his facilities, but decides that he and his assistant (also love interest, and former girlfriend of Reed) Susan Storm accompany him, and the mission is piloted by Von Doom astronaut Johnny Storm (Susan's brother and former subordinate of Ben).

On the Von Doom space station, Ben is sent to arrange plants for experiments with the cosmic storm, while Reed monitors its approach. Whilst Ben works, Reed find the storm is accelerating much more than he anticipated, and tries to get Ben back inside before it hits.

When Victor refuses Reed's plea to abort the mission, the station is engulfed by its vast energies. Whilst Victor is seemingly safe behind the station's shields, the others attempt to rescue Ben (who was space-walking at the time) and are exposed to the cloud.

The astronauts make it home intact and are taken to Victor's private hospital to recuperate. There, they begin to experience physical changes. Reed find his body is able to stretch far past normal lengths. Susan finds she is able to turn invisible, and Johnny finds he can engulf his body in flames without being harmed, and has some limited flying ability. Ben, however, is traumatized by his transformation into an orange, rocky creature of superhuman strength. Ben flees the hospital, heading back home.

In New York, Ben contacts his former fiancee, but she is terrified by his new appearance. Dejected, Ben retreats back into the shadows. He finds himself on a bridge, where a man is contemplating suicide. In attempting to help him, Ben inadvertently causes a massive traffic accident. He goes to help, as the rest of the team turn up. Using their new-found powers, Reed, Susan and Johnny help to save everyone involved in the accident, and are hailed as heroes in the media.

Victor, meanwhile, is developing his own powers. The head wound he sustained begins to spread, and reveals a metallic layer underneath the flesh. He also finds an ability to affect electrical equipment and that metallic objects near him begin to vibrate.

The Fantastic Four (although they have yet to adopt this name) all move into Reed's apartment in the Baxter Building, where Reed works to reverse the storm's effects, particularly for Ben. He subjects them all to tests, finding the hottest temperature Johnny can reach (as hot as a supernova, capable of vaporising all life on the planet) and finding the triggers for their powers. (He finds they are caused by emotion: when Susan is annoyed or angry she turns invisible. When Johnny is particularly excited, he can flame-on). However, he cannot work out why Ben is unable to turn his powers on and off. Johnny, tired of being cooped up inside, runs off to participate in a motocross event, exploiting his powers to pull off tricks. As he finishes, the media swarms him, pressing for details of the team. It is now that he gives the team their names- Mr Fantastic, the Invisible Girl, the Human Torch, and The Thing. Ben is particularly put out by this moniker.

Victor is called to a meeting by his stockbrokers, who inform him that due to the disastrous space mission, his company is in serious financial danger, and they are planning on withdrawing their capital. It is a final comment, suggesting Victor returns to his home country of Latveria, which causes Victor to snap and murder the head of the stockbrokers that evening.

Victor decides that Reed is responsible for his problems, and by proxy the rest of the team. He finds Reed has been working on a machine to reverse their powers, but it lacks enough electricity to work. However, that is not a problem Victor has any more. He lures Ben into the machine and powers it himself, turning Ben human again. Victor then kidnaps Reed, and begins to freeze his body, knowing that if rubber is super-cooled it becomes so rigid that it can be shattered. He fires a heat-seeking missile at Johnny, knowing the Human Torch to be the hottest item in the vicinity.

Ben, meanwhile, realizes that if he is to be any use to his friends, he must become The Thing again. He steps into the machine.

Susan tries to stop Victor and save Reed, but on her own she is not powerful enough. Fortunately, Ben, now The Thing again, arrives just in time to initiate the final showdown.

As Johnny appears again, having avoided the missile and caused it to fly into the river by setting fire to a garbage barge and flaming off, the Fantastic Four is united against Doctor Doom (his body now completely metallic, and his face covered by the familiar mask). Reed co-ordinates an attack utilizing all their powers: Johnny flies around Doom, heating up to full supernova ability, whilst Susan holds a force-field around him to contain the heat. As those two members eventually stop, exhausted, a superheated Doom advances on the other two. Ben breaks open a fire hydrant, and Reed shapes his body into a funnel to shoot the water at Doom, cooling him rapidly and freezing his metal body solid.

Ben informs Reed that he has accepted his condition with the help of Alicia Masters, a woman for whom he has developed feelings, and the team decide to embrace their roles as superheroes and unite officially as the Fantastic Four. Reed takes Susan aside and proposes to her, which she accepts.

Von Doom, meanwhile, is last seen loaded into a crate and shipped back to Latveria. The electronics on the ship experience unusual interference, and it appears that Doom is not dead after all.

Retrieved from "https://marvelcomicsfanon.fandom.com/wiki/Fantastic_Four_(Earth-1010)?oldid=100127"
Community content is available under CC-BY-SA unless otherwise noted.