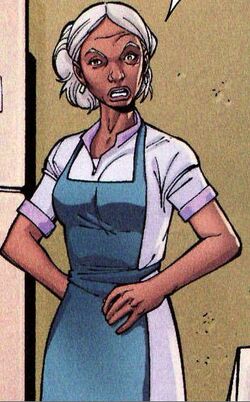 First appearance
Start of Something New

Faith Shabazz grew up in New York City. When she met Isaiah Bradley, the two fell in love and were soon married in 1940. They spent their honeymoon at the World's Fair in Queens. Unfortunately, the two were soon parted when, after Pearl Harbor was attacked by the Japanese, the United States of America entered the war, and Isaiah joined the military. This parting was compounded by Faith's pregnancy with their first daughter, Sarah Gail Bradley.

While training in Mississippi, Isaiah and 300 other African-American solders were forcibly recruited to serve as test subjects to recreate the Super Soldier Serum. To keep the operation secret, Faith was sent a letter informing of Isaiah's death. Faith believed Isaiah was still alive, and continued on with her life raising Sarah Gail as a single mother.

Months after Isaiah was rescued from Nazi Germany, he was able to finally return home where he was court-martialed and given life in prison for stealing the Captain America costume. Starting in 1943, Isaiah served seventeen years in solitary confinement. There his body and mind slowly deteriorate due to unforeseen side effects of the Super Solder Serum. He was only released because Faith wrote President Eisenhower a letter every month for three years. In 1960, on the day of Kennedy inauguration, Isaiah was granted a full pardon and swore to secrecy.

In 1953, years before Isaiah was released, Faith briefly moved with her young daughter from Brooklyn to Mount Vernon, Virginia. It was here that a young girl appeared claiming to have her son. The girl explained how the U.S. military had harvested semen from Isaiah (before the Super Soldier Serum made him sterile) and eggs from Faith during her appendectomy surgery, and about the thirty-eight failed attempts that occurred before Josiah was finally carried to term. Faith kept the child, but for the safety of herself, her daughter and her son, she had to abandon him on a train.

Twenty-five years later, still in Mount Vernon, Josiah returned to the Bradley home and met his mother, sister and childlike father. Unable to stay long for fear of being discovered, Faith told Josiah to return when it was time. Although, the Bradley family moved back to their home in Brooklyn, Josiah came to visit periodically to spend time with the family he never had. Recently Josiah had stopped visiting, and has not been seen by the family in over a year.

Faith helped care for her many grandchildren, and when Sarah Gail remarried and moved to Scottsdale, Arizona, she allowed her grandson, Eli, to live with her to finish out high school. Faith worked for many years as a Professor of Comparative Religion at different universities. Although she is now retired, she still occasionally teaches some semesters.

Recently, when Steve Rogers learned the truth about Isaiah and the other African-American soldiers, he sought out Faith to learn the whole story from her.

Without his grandparents' knowledge, Eli became a founding member of the Young Avengers, after gaining Super Soldier powers from a blood transfusion from his grandfather. Faith seemed to be complaisant with the transfusion.

Retrieved from "https://marvelcomicsfanon.fandom.com/wiki/Faith_Shabazz_(Earth-1010)?oldid=170456"
Community content is available under CC-BY-SA unless otherwise noted.