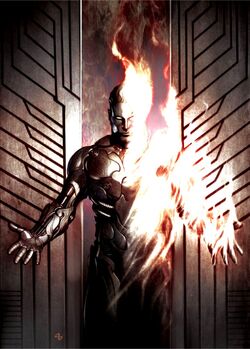 The Inhuman Torch? Well, how "original" was that?

Subject: F1A133 is a cyborg clone of several heroes whose mostly powers and abilities is to generate and manipulate fire, most notably were Jim Hammond and Johnny Storm. This creation was one of the super-human subjects created by H.A.M.M.E.R. led by Edward Stark. Originally Hydra intended to steal the blueprints of the Synthetic Man Project and other inventions of Phineas Horton to use in their quest against S.H.I.E.L.D., however S.H.I.E.L.D. managed to get to them before Hydra and used them to stop the terrorist organization's agendas and schemes on using Horton's Projects by using it as a tool of war and chaos.

As a small victory, H.A.M.M.E.R. (the future incarnation of Hydra) managed to steal a sample of Horton Cells, and the final blueprints for the Synthetic Man. They later used them in the creation of the clone known as the Inhuman Torch, an upgraded version of the unfinished Synthetic Man and the identical clone of Jim Hammond, the second Human Torch, whom he would later grudgingly hate.

In the wake of H.A.M.M.E.R. being declared as one of the United Nations' most trusted allies and one of its multi-billion benefactors all over the world, Edward Stark eventually made its ultimate move on world domination, by making President Ross unknowingly dissolving the entirety of the United Nations and every other peace-keeping organizations worldwide in the process, creating a great opportunity for Stark and his two-faced organization into declaring an absolute once-clandestine totalitarian world government, turning it publicly, changing the entire course of the history of society as we know it, forever.

During the first days of Stark's declaration, most people started to create havoc and panic across the cities, causing unstoppable conflict and devastation as most countries have started losing their government systems, being torn down by its citizens in the process, turning its nation into an anarchic and extreme state so powerful, not even its military forces could stop it. However, despite the times the military coups started having the advantage to maintain order on those chaotic countries, H.A.M.M.E.R. immediately stepped in with its unstoppable forces, pretending to save the citizens from "harm and abuse of power," caused by the coups. One of those forces that were released by H.A.M.M.E.R., was an army of androids that were based on the Synthetic Man Project of Phineas Horton, which was also led by the Inhuman Torch.

As a result, most citizens around the world have started trusting H.A.M.M.E.R. from that day on forward, mistakenly taking their sinister schemes as a "salvation project," from the grasps of the militia, whose intentions were to actually save them, not terrorize them. Consequently, most of the citizens were fooled by Stark's agenda, making their establishment on New World Order a total success, forcing everyone who were against Stark (The Resistance), and who were supporting on overthrowing his government, to go in hiding. Those who were unfortunate to get caught, however, were forced to be imprisoned for the rest of their lives, going through public execution, or even much worse.

Throughout the Inhuman Torch's days, battling against the members of the Resistance, "he" was considered by the Resistance themselves as one of the best combatants when it comes into facing them, even though in reality, H.A.M.M.E.R. cheated, without anyone of them knowing that the Inhuman Torch wasn't just a clone of Johnny Storm and Jim Hammond, but was also a cybernetically-enhanced individual, devoted into serving Edward and following H.A.M.M.E.R.'s ideologies its entire life. The Subject: F1A133's dark secret would remain to his foes, that is, until the rise of the Empire's fall has begun to be executed by this age's: Earth's Mightiest Heroes, the Resistance.

During the battle, the Inhuman Torch tried his very best to prevent the heroes from taking down and cleaning up the remaining active bases and headquarters of the Empire, after the Punisher sacrificed his won very life, in detonating all the explosives that blew up most of it. In the ensuing battle, FIA133 manages to take down a few several soldiers who have helped the Resistance, however, it all thankfully ended, after his most despised enemy and the source of his essence, the second Human Torch, Jim Hammond, had arrived in time to save the day from the flame-headed cyborg. The two confronted, before immediately engaging in battle, with F1A133's motivation on winning, was to prove that he was a worthier and a better candidate on taking up the mantle of the Human Torch, while Jim's motivation was to only prevent the Inhuman Torch from inflicting more damage and harm throughout the city.

During their final battle, F1A133 was almost successful in killing Jim, by repeatedly knocking him out until he passes out, giving him the opportunity to drag his unconscious body into the depths of space in order to suffocate Jim. The Inhuman Torch was somehow successful, seemingly to have finally killed Jim since he stopped responding after he was mercilessly chocked by the cyborg. However, just as before FIA133 could've disintegrate his body, Jim's eyes suddenly open, revealing flaming yellow eyes.

Surprised to see Jim survive, F1A133 immediately attempted to attack Jim once more, however, the Human Torch's overpowered form single-handedly counteracts all of the Inhuman Torch's attacks, before throwing his own clone away from the Earth's orbit towards into the direction of the Sun, giving him a supersonic punch as Jim catches up on him. FIA133 was severely damaged, having most of his body and limbs torn and shredded into bits after receiving Jim's treatment, but miraculously survives. Still alive, the Inhuman Torch used his remaining limb and parts to battle Jim, but were proven ineffective against the Human Torch, since he was still overpowered. Seemingly defeated, FIA133 tried to call his closest allies in order to seek for their help, however, he never even realized, that his allies, including his own father, have already abandoned him, after they cut him out from the Empire's connection, believing that he was already dead. With this, FIA133 felt betrayed and outrages in anger because of it.

As an act of taking Jim and the rest of Earth with him in defeat for betraying him, the Inhuman Torch decided to use his final resort against his most hated enemy, by activating himself into a nuclear bomb, powerful enough to destroy a planet the size of the Moon. Realizing that Jim's powers alone cannot defeat FIA133 and prevent him from detonating, he decided to lured FIA133 away further from the Earth and closer towards the Sun.

As a final act of trying to keep the Inhuman Torch away from Earth as he detonates, Jim uses most of his energy inside him, delivering a powerful blast, which ultimately drove FIA133 directly into the surface of the Sun, driving him straight into its radiative zone where he detonated, which caused nothing but accidentally powered up the Sun in the process, and also, FIA133's own demise.

Only a few months after the Empire fell, FIA133 was revealed to have some of his important brain matter still survive outside the depths of space, and having the extraordinary ability to regenerate at a rapid state. As he slowly regenerates into having a body, he kept on thinking on vowing against eradicating all life not just on Earth, but also everything else in the entire existence and reshape it on his own will, where no one or nothing could've ever betrayed him, after everyone and everything that he once trusted betrayed him.

Hearing this repeated thoughts as continuous cries, an unknown entity from deep space eventually and suddenly appeared in front of FIA133's remains out of nowhere, before immediately possessing him in the process, which somehow had sped up his healing and recovery, turning the Inhuman Torch whole, alive, and well, again. The entity was then revealed to be the Phoenix Force, who have heard the cries of FIA133 from afar. Upon possessing the cyborg, they had a mutual bond, having the same desire to wipe out all life, so it can finally be reborn. While the Phoenix had possessed Inhuman Torch, it also granted him his final wish on having the ultimate power against his most hated foes, especially the Human Torch.

Now becoming more powerful than he ever was, the Inhuman Torch finally unleashed his ultimate power as he immediately flies towards the surface of the Earth. However, the change he had seen were not what he was expecting, as he was seeing two Earths, instead of just one. Despite the incursions about to occur on his universe, it didn't bother FIA133 that much, making him continue his assault on obliterating both Earths using the Phoenix Force in his own hands.

After releasing a deadly powerful energy that would disintegrate both planets, he was suddenly interrupted after he was caught between the crossfire caused by this universe's Thanos and his powerful Starfleet, who also had the attempt on conquering Earth, but was also interrupted by the following incursion. At first, FIA133 mistakenly thought that Thanos and his Starfleet were directly shooting at him, however, they never even noticed in him and was only aiming towards the other Earth, trying to destroy it in order prevent it from colliding with this reality's Earth.

However, they still seemed to be failing, and as FIA133 tried to release a universal energy powerful enough to obliterate the entire universe once more, it was already too late for him and for the rest who tried to prevent the incursion. The powerful energy summoned by FIA133 through the Phoenix Force wasn't even enough to prevent the incursion, and before he could've done anything else to escape the collision of two worlds, he was ultimately crushed and was disintegrated between the two Earths, and was finally killed inside the powerful explosion caused by the incursion, killing most of the inhabitants from both realities in the process who never made it through Battleworld. Unfortunately, not even the Phoenix Force could've saved FIA133 or even itself, for that matter, from the following incursions caused by the creators of the Multiverse, the Beyonders, and never made it through the creation of Battleworld.

As the Phoenix Force Avatar:

Retrieved from "https://marvelcomicsfanon.fandom.com/wiki/F1A133_(Earth-61616)?oldid=256271"
Community content is available under CC-BY-SA unless otherwise noted.