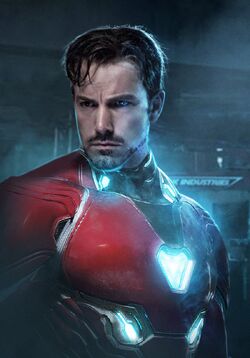 If it's on a computer, it can't hide from me.

Ezekiel Stane grew up in the shadow of his father, Obadiah's greatness. As teenagers, Ezekiel and Tony Stark were best friends, but grew apart in college. Ezekiel dropped out, believing himself to be too smart, and began working at a small tech startup run by George Tarleton, in spite of his father, who was a high ranking member of Potts International. They later bought out the tech firm, and laid of Tarleton, with Ezekiel only keeping a job in Potts because of his father.

Angry and wanting to prove himself, Ezekiel exposed himself to Terrigenesis. He wasn't the most compatible candidate, so the Terrigen ended up permanently transforming his body into living nanotech, connecting his brain to the mainframe of all technology across the Earth. With his father finally impressed, Ezekiel was dubbed Iron Man and placed on the Squadron Supreme.

Despite publicly appearing as a hero, Ezekiel used his connection to the internet to spy on everyone and learn secrets about his friends and enemies in a misguided attempt to know everything, and one day take control of Potts and the Squadron for his own means.

Ezekiel would later be killed during the confrontation between the Avengers and the Squadron Supreme, in which Tony Stark was able to upload a virus into his bloodstream, effectively cutting off his oxygen and causing him to have a seizure, resulting in his death.

Retrieved from "https://marvelcomicsfanon.fandom.com/wiki/Ezekiel_Stane_(Earth-1515)?oldid=244512"
Community content is available under CC-BY-SA unless otherwise noted.