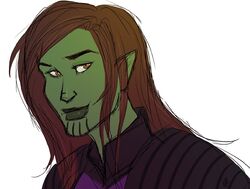 Earth-565
Base Of Operations
The Nexus
Characteristics
Gender

The Skrulls, we can be anyone we want to be. I chose to be myself... and that was too much for them.

Ez'me was raised under the fascist regime of Skrull Emperor Dorrek VII. Both of her parents were dedicated soldiers, who forcibly enlisted her into the infiltration army during their secret invasion of the Earth.

For her entire life, Ez'me had been forced to assume the role of a male Skrull, despite gender being very fluid among their race. When she was assigned to infiltrate the Office of the White House, Ez'me fabricated her own identity as the President's personal Secretary named Esme Loren, and while in this position she began to notice lots of similarities between the governments of Earth and that of her home on Skrullos. Disappointed as she was, she still found herself growing to care for the very humanity she was infiltrating. When the official Invasion began, Ez'me ended up going into hiding and waiting out the battle until her species had been defeated and mostly imprisoned by the Avengers.

Too nervous to remain in a position so close to the government, Ez'me assumed a new identity as a simple farm girl named Laura, and moved to Kansas in order to lay low.

However, it wouldn't be long until her presence as a Skrull was noticed by some small-minded townsfolk, who caught the attention of S.H.I.E.L.D.

Believing that there was no hope for negotiation, as all Skrulls had been branded as terrorists, she went on the run. Eventually she found herself cornered in a convenience store in Colorado, with S.H.I.E.L.D. agents circling the store.

Saying a prayer to a God she didn't believe in, Ez'me then found herself in the presence of the heroes Cyclops, Scarlet Witch, and Mirage, from Team X. Confused, Ez'me believed them to be there to kill her, but quickly realized she was wrong when they began fighting off the S.H.I.E.L.D. Agents.

They then explained to her that they came from a place called the Nexus, where their team is based between realities. They offered Ez'me a new home where she wouldn't have to pretend to be someone else or fear for her life, and she eagerly accepted the offer.

Retrieved from "https://marvelcomicsfanon.fandom.com/wiki/Ez%27me_(Earth-565)?oldid=262816"
Community content is available under CC-BY-SA unless otherwise noted.