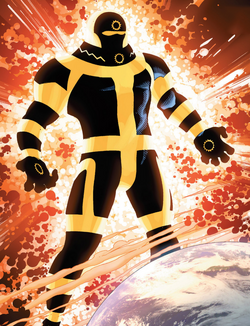 I deem this world... unworthy.

Exitar is a Celestial, one of the oldest beings in the galaxy. He eventually inherited the role of Exterminator when Eson evolved into a searcher. He was spent centuries traveling the cosmos, eradicating civilizations deemed unworthy of surviving.

He eventually made it onto Thanos and the Black Order’s radar, who sought to kill him. Exitar proved to be a formidable opponent, and was able to escape, albeit not unscathed. He has since dropped off of the cosmic radar, and even the Nova Corps has been unable to locate him.

Retrieved from "https://marvelcomicsfanon.fandom.com/wiki/Exitar_(Earth-101)?oldid=250646"
Community content is available under CC-BY-SA unless otherwise noted.