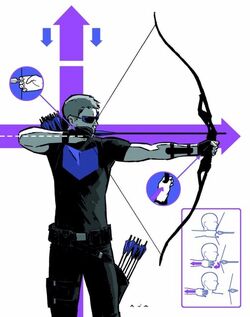 Evan was born to Michael and Katherine Quill. At a young age Evan became fond of his father and would go into his office for hours. Evan would study his fathers books on Engineering, Art, Music, Law and business. Evan was bullied at school by gang that followed his brother James. One day while begin bullied Evan found a sports cupboard with a bow and arrow. Evan used it to scare away the bullies when on accident he fired it causing it to hit the principles office. Evan was sent home immediately where he told himself Archery would be his hobby

While studying Engineering at M.I.T, Evan was approached by Laurence Trask a 60 year old man who told him his skills where extraordinary. Laurence asked Evan to drop out and work with him at Trask Industries where his skills would be used for to help create Project: Wideawake and Project: Sentinel.

When Doctor Doom and his version of the Masters of Evil attacked Chicago, Evan was on the first flight back to his home state. Evan then discovered that it was his town Doom attacked, Evan hitchhiked his way home till he witnessed The Avengers and Master of Evil fight when Hawkeye was crippled after having his back broken by Abomination. Evan quickly bought a ski mask and ran over to the crippled archer, Evan took his bow and quiver and ran towards Abomination who grabbed him and prepared to throw him. Evan fired a explosive arrow in Abominations face causing him to drop Evan, Evan then fought along side the Avengers until the Masters of Evil were defeated. Evan then helped Hawkeye onto a S.H.I.E.L.D Medical gurney, Evan was approached by Agent Maria Hill and Clay Quatermaine who asked him if he could replace Clint Barton as Hawkeye because Barton would be out of shape permanently.

Equipment: Trick Arrow Quiver: Hawkeye's quiver is supplied with a multitude of different arrow heads in the bottom. By dialing up an armament setting from a control on his bow, he can cause the quiver to affix these special arrowheads. This effectively increases the capabilities from conventional arrows, to explosive arrows, a grapple line, and more.
Transportation: Sky Cycles:
Weapons: Collapsible Recurve bow: The bow is capable of folding on itself (most likely for either easier transport, concealment, or both) that can be quickly snapped into its 'armed' form. It has a selector and transmitter that allows Hawkeye to control his mechanical quiver so that he can acquire certain arrows from it. It also has a laser sight.

He is not related to Peter Quill/Starlord

Retrieved from "https://marvelcomicsfanon.fandom.com/wiki/Evan_Quill_(Earth-3220)?oldid=231156"
Community content is available under CC-BY-SA unless otherwise noted.