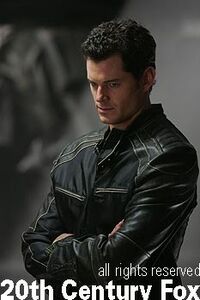 Evan discovered his powers as a teenager and in his twenties had a short stint as a superhero known as Everywhere Man but he soon realized that being a superhero doesn't pay the bills so he turned to crime. He became a thief by the name of Multiple Man using his clones to rob many banks, he also was in prison on and off. When Leech found him in prison and broke him out he joined the Outsiders.

Evan can make clones of himself. He can mentally kill them when he doesn't need them and if his clone are killed nothing happens to Evan. If he is killed all his clones will be destroyed.

He possesses the normal human strength of a man of his age, height, and build who engages in moderate regular exercise.

Retrieved from "https://marvelcomicsfanon.fandom.com/wiki/Evan_Munroe_(Earth-717)?oldid=231155"
Community content is available under CC-BY-SA unless otherwise noted.