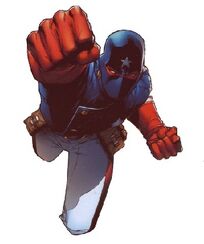 Evan Millers was born to two SHIELD Agents, One French (his mother) and one Canadian (his father) who both died on a mission a week after his younger sister Paige was born. Evan and his two sisters the other one being his older sister Olivia were raised by his grandfather and mother Mason and Martha. Evan was bullied at school the same day Agents Nick Fury, Phil Coulson and Maria Hill visited his school. The three agents saw the fight between two bullies and Evan. Evan lost and was thrown into the mud left with a bloody nose. When Nick and Maria realized Phil had walked onto the field and comforted Evan. Phil took Evan home, where he was recognized by Evan's uncle Kevin. Evan then researched SHIELD.

Peak Human Strength: Evan's strength was increased to the peak of human potential. While not superhuman, he was as strong as it was possible for a normal human to be and could lift approximately 800 lbs.

Peak Human Speed: Evan could also run and move at great speeds, capable of reaching up to 30 miles per hour (he has been shown almost outrunning a helicopter).

Peak Human Stamina: Evan's musculature produced less fatigue toxins during physical activity than most other humans, though not to a superhuman degree. He could physically exert himself at peak capacity for approximately 1 hour before the build up of fatigue toxins in his blood began to impair him.

Peak Human Durability: While not superhuman, his body was as durable as a normal human's could be. While still subject to all human physical vulnerabilities, he was more resistant to them than most other humans.

Peak Human Agility: Evan's agility was also increased to a level that, while not superhuman, was superior to that of any Olympic athlete that has ever competed.

Peak Human Reflexes: Evan's reflexes were increased to similar levels and were superior to that of any Olympic athlete.

Peak Human Reflexes: Evan's reflexes were increased to similar levels and were superior to that of any Olympic athlete.

Skilled Combatant: Even without his powers, Evan, partially through his adventures with the Young Avengers, is an experienced and formidable hand to hand combatant.

Skilled Athlete: Evan is an excellent athlete and has portrayed skill in Parkour.

Skilled Tactician: He has proven himself to be a capable leader and a naturally skilled tactician.