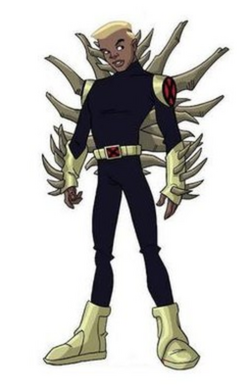 Earth-1887
Base Of Operations
The Xavier Institute
Characteristics
Gender

It's hard to think of yourself as a hero when you have to live up to Gods.

Evan Daniels was born to Ororo Munroe's estranged sister who was raised in the United States of America. He met his Aunt Ororo when he was 10, and she was there for him when his mutant powers manifested when he was 16. He quickly became a natural and joined the X-Men's team of New Mutants.

Spyke was recruited into the Outsiders under the threat that if he returned to his reality, Storm would become possessed and lose her mind and body to the Shadow King, eventually forcing Spyke to kill her. Reluctantly, Spyke agreed to become an Outsider.

He served his tenure with the team for sometime, until eventually being granted a victory by The Outsider and sent back to his home reality.

Retrieved from "https://marvelcomicsfanon.fandom.com/wiki/Evan_Daniels_(Earth-1887)?oldid=244511"
Community content is available under CC-BY-SA unless otherwise noted.