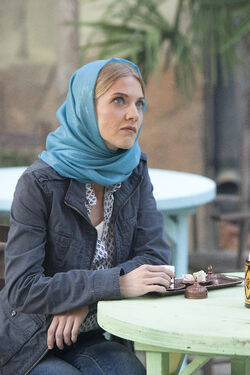 Eva Belyakov was an Inhuman granted enhanced strength through Terrigenesis. She also wanted her daughter Katya to be undergo the change, but Jiaying, seeing a darkness in Katya, refused to allow her to be exposed to the mists.

Believing her daughter's birthright was denied to her, Eva stole Terrigen Crystals from the Inhumans and went on the run with her daughter. The mists gave Katya the ability to leech off a person's emotions with the simplest touch, giving her control over her victims. Since she was so young, Katya's powers drove her insane, and her mother became one of her victims.

By 2008, they made their way to Bahrain, where the had attracted the attention of S.H.I.E.L.D. Agent Phil Coulson approached her in an attempt to get her to turn herself over to them, but Eva violently rejected the offer and attacked Coulson. A team of thugs under Katya's control grabbed Eva and her daughter and took them to a nearby building. A team of S.H.I.E.L.D. agents soon followed to rescue Katya, who they believed to be a hostage. One agent, Melinda May, found Eva and killed her with a broken piece of furniture.

Retrieved from "https://marvelcomicsfanon.fandom.com/wiki/Eva_Belyakov_(Earth-1010)?oldid=252451"
Community content is available under CC-BY-SA unless otherwise noted.