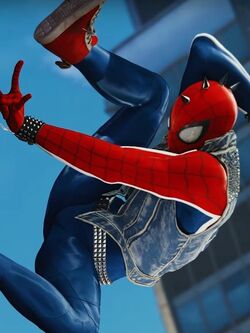 Earth-2542
Base Of Operations
The Outside
Characteristics
Gender

A good friend of mine once told me that with great power comes great responsibility. For the longest time, I didn't get what that meant, I just thought that power corrupted. But then I learned what true responsibility really meant.

Flash Thompson was bitten by a genetically modified spider on a school field trip. Mutating into a cross species with spider powers, he wanted to fulfill his long time fantasy of being a hero. However, circumstances dictated a different outcome. The United States of America, under the rule of President Norman Osborn had become a capitalistic hellscape, with Flash's family simply being one of millions to be thrust into poverty. Rather than fighting supervillains, Flash teamed with his best friend, the genius Peter Parker, to create an alter ego that stands up to the fascistic government and fights for the people. Spider-Man soon became an icon who stood for freedom and equality, while the propaganda media dubbed him the "Spider-Punk", which he fully embraced.

He would later be recruited into the Outsiders when they needed a new team to help them repair the cracks to the multiverse caused by Odin. Flash was ecstatic to help on a grander scheme, finally fulfilling his superhero fantasy. However, after the mission was complete, he still felt the responsibility of saving his own world. The Outsiders were more than happy to assist him in this endeavor, overthrowing Norman Osborn and electing Tony Stark to help usher in a new age. Grateful for their help, Flash agreed to stay with the Outsiders and continue making a difference across the multiverse, finally feeling at peace that his home was in good hands.

Retrieved from "https://marvelcomicsfanon.fandom.com/wiki/Eugene_Thompson_(Earth-2542)?oldid=246140"
Community content is available under CC-BY-SA unless otherwise noted.