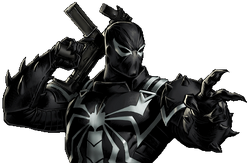 Flash Thompson was a student at the Midtown Science High School and basketball player there. He used to bully other students such as Peter Parker and was victim of him when Parker was discovering his powers, when Peter humiliated him in front of other students by feinting to give Flash a ball and throw it to him repeatedly. After Peter's uncle was shot, he began to console Peter, but was met with Peter grabbing him and shoving him against a locker. This did not deter him from calming Peter, however. He later becomes a big fan of Spider-Man, and a friend of Peter's after his showdown with the Lizard.

After joining the U.S. Army, Flash lost his legs. However, he was given a chance to get them back by bonding with a third of the Venom symbiote so he could locate both Venom and Torment and turning into an ally of Spider-Man and his friends.

Skilled Marksman: Flash has been trained in sharpshooting and marksmanship from the U.S. Army.

Skilled Combatant:Due to formal training as a boxer and a soldier, Flash is an exceptional combatant and easily combines his abilities with the use of symbiote powers.

Retrieved from "https://marvelcomicsfanon.fandom.com/wiki/Eugene_Thompson_(Earth-1010)?oldid=209213"
Community content is available under CC-BY-SA unless otherwise noted.