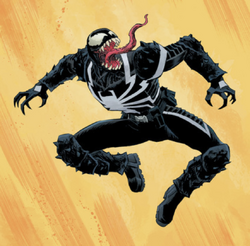 Hell, if I'd known you were Spider-Man in High School I would've begged you to kick my ass!

Eugene Thompson was the Quarterback at Midtown High, where he earned himself the nickname "Flash". He was always secretly jealous of Peter Parker, which resulted in him picking on Peter to cover up how he truly felt. He wished he was smart like Peter, then maybe his father wouldn't be so hard on him.

Flash later won a football scholarship to Empire State University. While attending school there, he felt like it was time to grow up and try to be friends with Peter, who agreed to tutor Flash. Over time, the two actually became close friends, and Flash started hanging around his group with Harry Osborn, Gwen Stacy, and Mary Jane Watson.

One day, Flash had his life threatened on campus by the psychotic villain, Carnage, but was saved by Spider-Man. Flash confessed he'd always been a big fan of Spider-Man, and during their brief conversation, started to recognize his voice. Unsure, but wanting to prove his theory, he started following Peter to catch him in the act, eventually managing to barge into his dorm right when he was changing out of his costume. Peter freaked out and made Flash promise not to tell anyone, which he agreed to, and was just simply overjoyed to learn his friend was Spider-Man.

Becoming inspired by Peter and feeling helpless after the Carnage attack, Flash dropped out of Empire State University and joined the Army. He proved to be an exemplary soldier, but not long after being deployed into the field, he had his leg blown off by an IED. Returning to the US in a wheel chair, he was surrounded by love and compassion by his friends, but he just felt lost.

Eventually, Spider-Man returned from a space mission with the Avengers, having bonded to the Venom Symbiote once more. The Symbiote sensed Flash's pain and sought Peter's permission to bond with him. Once the two connected mentally, they formed the perfect match, and the symbiote was able to make up for the loss of his leg. Becoming the new heroic version of Venom, he was eventually selected by General Thaddeus Ross to lead the Thunderbolts, a team of reformed supervillains acting secretly under the Avengers.

Retrieved from "https://marvelcomicsfanon.fandom.com/wiki/Eugene_Thompson_(Earth-101)?oldid=249327"
Community content is available under CC-BY-SA unless otherwise noted.