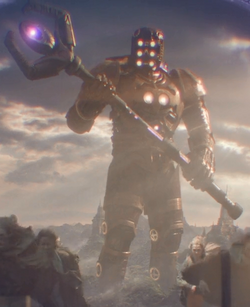 Never before have I seen such arrogance in a lower life form.

The Celestials were the first intelligent species to ever wander the galaxy. One such Celestial was Eson, who took it upon himself to wander the universe and amass information. Eventually, he found himself becoming judge, jury, and executioner of civilizations that did not fit the Celestials' vision.

He eventually came into possession of the Power Stone, which allowed him to annihilate entire planets in one blow. But eventually, he grew weary of this responsibility, and turned over the role of Exterminator to Exitar. Eson then resigned himself to simply traveling through the stars.

Over the millennium, Eson found himself pulled back into the fray when Thanos began collecting the Infinity Stones. Eson confronted Thanos and Hela in Niffleheim in an attempt to end their crusade, but despite all his power, was no match for Thanos and the Infinity Gauntlet. Their battle raged and shook the cosmos, but ultimately ended with Thanos puncturing his entire body through Eson's chest.

Retrieved from "https://marvelcomicsfanon.fandom.com/wiki/Eson_(Earth-101)?oldid=250190"
Community content is available under CC-BY-SA unless otherwise noted.