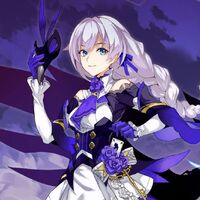 I only have one purpose in life, to fight evil with evil.

Eschel's father, Mikaboshi, the god of terror and evil, would produce many children in order to have one with the same power as himself, but none matched his power. However, when Eschel was created, she was finally a match for his power. Shocked, he sent her to Earth to oppress all living organisms there. During her transportation to Earth, she obtained all information about the universe and knew that Mikaboshi's purpose in the universe was to terrorize everything. Mikaboshi told Eschel that she had a limited amount of time to terrorize the world. She knew that what he wanted to do was evil, so she went to earth to get help to defeat Mikaboshi instead of helping him.

Eschel was summoned to Doctor Strange's headquarters in New York due to her being a possible threat to the world. Since she did not who how or why she was created, Strange started to analyze her soul power. He found out that her power came from the celestial Mikaboshi, who carried tremendous power unlike any being in the universe. As soon as they discovered her power, she momentarily started to project her soul self and bound Strange onto the floor. When her soul self temporarily vanished, she started to have a mental breakdown and apologizes for her actions. Eschel could not control her soul self due to Mikaboshi's manipulations when she projects her soul self. When Mikaboshi takes complete control of her body, they will become unstoppable and her soul starts to die. Doctor Strange investigated further to stop Mikaboshi from taking over her body. He performed a ritual to extract Mikaboshi's entity from her body, which was successful.

A few days after her extraction, she set out to the Avengers to undergo training with Wanda Maximoff to further advance her magic and combat training. Mikaboshi appeared above the Avengers' headquarters and informed the Earth that they would be terrorized upon the winter solstice. Traumatized, the Avengers questioned her intentions in this world. She told them that she wanted to undergo training to defeat Mikaboshi, who was her father. Since his proclamation, she underwent training for several months to defeat him.

As the winter solstice came, Eschel created a portal to Mikaboshi's grotto with the Avengers to defeat him. The Avengers struggled to oppress Mikaboshi. However, Eschel sealed Mikaboshi and his soul into a black masquerade mask, which from then on served as her source of power.

Hybrid Physiology: Due to Mikaboshi's parentage, she is part human and God, giving her supernatural abilities. She has abilities that are inherited from Mikaboshi's power, and can turn it into a black, viscous liquid made out of pure negative energy that she can manipulate out of her body. When she sealed Mikaboshi into her masquerade mask, her powers increased and grew in control of her soul self. This allows Eschel to defeat anyone with ease.

Umbrakinesis: With or without her soul self, Eschel has the power to produce pure negative energy which resembles a black, viscous liquid or mist from her body and manipulate the element for a multitude of purposes. After some training with the others, she was able to control it to attack Mikaboshi and Thanos. She can effortlessly restrain Captain America and the Hulk, who both possesses superhuman strength. When sparring with Scarlet Witch, she could overpower her powers by creating a large blast of her negative energy towards her and when fighting against Doctor Strange which she binds him into a thick, black liquid that covers his body unable to resist the power.

Eschel's only weakness is when her masquerade mask breaks. Although the mask is made with Mikaboshi's energy, it is still fragile like an ordinary mask. Breaking the mask is difficult to impossible to break. However, when the mask is harmed, her powers and her soul self powers weaken.

This character is completely made up and written for entertainment purposes. It may be used for role-playing purposes.

Retrieved from "https://marvelcomicsfanon.fandom.com/wiki/Eschel_(Earth-616)?oldid=254987"
Community content is available under CC-BY-SA unless otherwise noted.