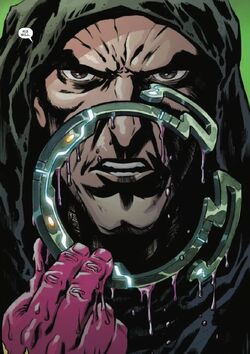 Every now and then... There's only one thing that keeps me day and night... His will...

Eros is the eldest son of two Eternal Titanian monarchs A'Lars and Sui-San. Eros grew up to be a fun-loving, carefree womanizer in contrast to his once innocent younger brother Thanos, who secretly developed into a power-hungry, misanthropic schemer. Tired of his parents and relatives's endless bickering about his frisky and sloppy personality, Eros rebelled against his family left Titan entirely, seeking out his own desires, embarking an exploration of pleasure and recreation on humanoid-inhabited worlds. Despite being distanced from his family, Eros still realized moral and essential value by how much his family had raised him, sending them gifts by the end of each year. Unbeknownst to Eros, however, his favorite little brother now simply took the gifts he once loved receiving for granted, since he had already fallen into the grand schemes of "Death" as the malevolently-manipulated Thanos had irreversibly changed into something far more sinister than Eros, his family, and the rest of the universe could've ever imagined.

Following the end of Supreme War, Thanos then ensured his actions could never be counteracted by destroying most of the planets he had encountered with the explosive device he had his forces implanted on every single one of the planets' core, the Squadron Supreme was finally able to him down on Titan to confront him for what he has done, before then being furiously assassinated by the unhesitant Nighthawk, mercilessly killing the mad child in his own bedroom. At some point in an alternate future, this powerful and unbelievable action of the Squadron Supreme would've sparked a far worse conflict than what Thanos had already triggered. Much to the grief and outrage of Eros once he found out the loss of his younger brother, he (who was also slowly manipulated by Death herself just as she manipulated his brother) declared a "war against the entire universe" to avenge his late little brother, under the strings of Death herself who got the chance to influence Eros' actions after taking advantage over the Titanian's broken emotions, with Death posing herself as the postmortem "spirit" of Thanos.

Listening to the very non-corporeal figure whom he thought was his own brother, Eros effectively took over the Titanian Empire as its leader and the chief commander of every army that Thanos has created and assembled. Using his the Sanctuary II as his command ship to accomplish and finish what his brother had started, Eros unhesitatingly unleashed his first planetary assault on Earth, mainly aiming to bitterly punish and slaughter the Squadron Supreme, especially the member who mercilessly killed his brother, Nighthawk. Noticing the sun being Hyperion's greatest source of power, Eros used the command ship to move the Earth's moon to block the Sun which created a perpetual eclipse as a way to keep Hyperion's power in a normal to low level as possible, before he and his legions of raging and ravenous corps charge onto the planet's atmosphere, continuing Thanos' Supreme War under Eros' effective succession.

For days, America's Squadron City was heavily under attack by Eros and his forces until most of the Squadron Supreme and other heroes were finally taken down, resulting in casualties mostly among the superheroes and authorities within the affected areas. Considering the murder of his brother at Nighthawk's hands as unforgivable and irredeemable, Eros vengefully slew the hero with his younger brother's Double-Edge Sword, a questionable yet thoughtful gift which Eros once gave to Thanos due to the latter's early dream of becoming a great warrior, months before he met Death. Initially coming to Earth only to kill Nighthawk, Eros changed his mind right after the surviving heroes remained persevere in bringing him to justice, despite being few in numbers. That moment, Eros was finally convinced that humans were more irrational and unforgivable creatures than he thought, slowly agreeing with his brother's supremacist-like philosophy only in a lot more morbid stance.

Instead of fulfilling Thanos' original goal to conquer the universe, Eros now seeks to eradicate it seeing how "unfair" and "irredeemable" reality is, just like how Nighthawk thought Thanos was before killing him. With one simple command given to his armies, Eros' mission of universal onslaught began, and it started on Earth. Slowly drifting away from his identity day after day of destroying civilized planets, Eros was given a different name: Perses, named after the late Titan god of destruction by those who began to fear and worship him across intergalactic communities, and some who either wished to negotiate with him or simply simply abstain from the Titanian's fiery path of chaos, who was unknowingly fulfilling the name of Death with his destructive crusade. Piece by piece, this man has finally abandoned his name and identity of Eros altogether, finally embracing the living symbol of horror and terror that the universe now see him as Perses, and only the memories of his brother were the only valuable essence that strives him to live and destroy all there is until everything that remains is left is death itself, in which such a goal could only allow him to die and be with his family on the "other side."

At some point later on, a lonely and resting Perses was personally alerted to the presence of the time-travelling Exiles through the warning of a omnipresent being known as the Nth Man, informing him that the Exiles were from a parallel timeline where Thanos grew up as a universal madman. Accidentally making their way into this universe, the Exiles were actually in the attempt of going back to the past (a.k.a. the present) to prevent a juvenile Thanos from succeeding and fully embracing his despotic identity. Learning of the time-traveler's intentions in going back in time, Eros suddenly had a change of heart, telling the Nth Man that he wishes to go back in time as well not to destroy the timeline and pursue another vengeful agenda against the Squadron Supreme, but rather to try and save his younger brother from getting killed by Nighthawk, whom he still holds an unceasing grudge against despite already killing him out of retaliation several years ago. Sensing the sincerity within Eros, the Nth Man granted the former destroyer's one wish, knowing it would lead to his redemption, in a realistic sense.

Through the Nth Man's Seat of the Sanctimonious, Perses was easily sent into the past on the planet of Titan where he encountered the Exiles and eventually, the Squadron Supreme, in the midst of the Supreme War which has already ensued, much to Perses' fearful distress whether he could still change the past or if its a "fixed point in time" that can never be changed. Nonetheless of his doubts (which were secretly just another attempt of "Death" to tease and confuse him), Perses still went his way to risk everything just to save and redeem his younger brother at all costs in order to prevent millions to trillions of death from happening in the prime timeline, preventing from the present from having same fate as his did.

In the final confrontation of the heroes against Thanos, the once mysterious Perses, who revealed himself to be an unhinged and broken future version of Eros (Thanos' older brother), willingly sacrificed his own life to save Thanos from those who were willing to kill him, believing in the optimistic belief that his younger brother could still change and killing him wouldn't do anything good but harm (speaking from his own experience), making the Squadron Supreme realize that the former villain was right all along. While living as the tyrannical destroyer of worlds that was Perses, he still died as the redeemed Eros, feeling his normal self in his final moments as he got to see his younger brother live through the day, even if the latter would have to be punished first to be eventually rehabilitated growing up.

Half Cosmic-Powered Eternal Physiology: Eros possesses various superhuman attributes derived from his Eternal physiology. All Eternals have the ability to manipulate cosmic energies for a number of purposes. This energy is housed within the cells of their bodies and can be used to purposely augment their physical, mental and energy manipulative abilities.

Retrieved from "https://marvelcomicsfanon.fandom.com/wiki/Eros_(Earth-61712.37)?oldid=264668"
Community content is available under CC-BY-SA unless otherwise noted.