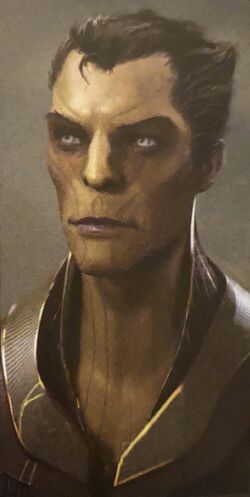 Dear brother, I have dedicated my life to stopping you from making these horrible mistakes, because I seek to save you! Please... please, have mercy in your black heart for the one person who has ever loved you...

Eros is the eldest son of the Titanian politicians A'Lars and Sui-San. His charisma made him popular from an early age, but his family's reputation became tainted following the birth of his baby brother, Thanos, whose mere appearance drove their mother to insanity.

While A'Lars became distanced from both of his sons, Eros always tried to show Thanos genuine love to prevent him from going down the dark path everyone else seemed to be forcing him into. Once they reached adulthood, Eros had become one of the Titanian peoples' leaders, putting him in direct conflict with his brother, who argued that the planet was on the brink of collapse.

Eros dared not risk his position of power, and thus ignored his brother's pleas. This led to the total decimation of the Titanian people, with only a handful of survivors. Eros himself had become outcast from the other survivors, leaving him to wander the universe alone. As the years went by, he eventually heard tale of the mad warlord named Thanos, and his quest for the Infinity Stones.

Not a doubt in his mind that this warlord was his little brother, Eros decided it was time to make amends for his past mistakes by preventing Thanos from destroying the entire universe out of revenge.

Eros began doing his own research into the Infinity Stones, which led him face to face with Odin, the Allfather of Asgard himself, who happened to already be in possession of the Space Stone. The two of them formed an alliance and began a quest to find the other five Stones. This journey eventually led to Eros falling in love with the Queen of the Inhumans, Tanith, who agreed to join their cause in hunting down the Infinity Stones.

Eros and Tanith eventually located the Soul Stone on Vormir, and traveled to the desolate world, unaware that one of them would have to die in order for them to claim the Stone.

When the Stonekeeper informed them of the ultimatum, Eros attempted to convince Tanith that it wasn't worth it, and that they would find another way to defeat Thanos. But Tanith knew better. She promised Eros that she was at peace with her decision, and proceeded to make him promise to finish the mission. Following her sacrifice, Eros claimed the Soul Stone for himself, and traveled to Attilan to inform Tanith's son, Agon, of her death. Distraught, but understanding, Agon agreed to join their mission. From there, the three of them continued to expand their ranks in order to better combat Thanos's efforts. Their new allies consisted of the Herald of Galactus, the Silver Surfer, as well as the Spyrican Overseer, Revos, and the sorcerer from Earth, Agatha Harkness.

After the Infinity Watch had procured half of the Infinity Stones, Eros discovered that Thanos was on to them. He turned over command of the mission to Odin, who he trusted to complete the hunt, and went into hiding on Knowhere with the Soul Stone. While there, he became the Apprentice of the Collector, who expressed interest in the Infinity Stones. Not trusting the Collector not to sell him out to Thanos, Eros trapped him in the Soul Stone and took to maintaining his collection on his own in order to keep a low profile.

As the years went by, Eros began receiving distress calls from his fellow Infinity Watch members, particularly Agon and Odin, who faced multiple assaults from Thanos's army, but were able to hold their ground in the end. However, Agon was killed, thus passing off possession of the Reality Stone to his son, Black Bolt.

As the number of heroes across the galaxy began to increase, Eros began to believe that Infinity Watch's efforts have not been for naught, and that Thanos will soon meet his end. Eros was wrong.

One day, Thanos's ship, the Sanctuary II, arrived at Knowhere, and his children, the Black Order slaughtered the communities living there, leaving only Eros to fend for himself. Noting that Thanos did not yet have possession of any other Infinity Stones, he believed he could fight back. Once more, he was wrong. Thanos's power had grown far beyond Eros's imagination. Beaten near to death, Eros begged and pleaded with his brother to cease the path he was on. Thanos seemed to consider this for a moment, before smiling devilishly at his big brother, and sucking him into the Soul Stone, where he was remained all throughout Thanos's rise to power.

Retrieved from "https://marvelcomicsfanon.fandom.com/wiki/Eros_(Dimension_0)?oldid=262976"
Community content is available under CC-BY-SA unless otherwise noted.