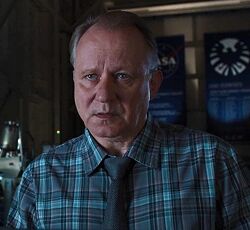 Dr. Erik Selvig is a brilliant Professor of Theoretical Astrophysics at Culver University. He is the mentor to postdoc Jane Foster as well as a friend of her father. Selvig was travelling in a van with Jane, and their assistant Darcy, when the mysterious weather event subject of Foster's research unexpectedly resulted in a powerful vortex before them. As they struggled with the zero-visibility conditions, the van collided with a man who had stumbled out of the dust into their path. The man, who only announced himself as Thor, was injured again when Lewis tazered him, prompting them to take him to hospital.

The following day, Darcy made a surprise discovery when she noticed the figure of a man in one of the photographic images captured from the atmospheric event. While Jane realised that the newcomer might be able to shed some light on the event, Selvig was more sceptical. So began a lengthy disagreement between the two, with Foster theorising about the possibility of an Einstein-Rosen Bridge and Selvig insisting that everything Thor had been saying about gods and other worlds was nothing more than delusional talk based on old myths.

Erik Selvig later befriended Thor, first securing his release from a temporary S.H.I.E.L.D. compound, and then drinking heavily with him at a town bar, prompting Thor to claim that Selvig had "made his ancestors proud". They parted company after Thor's true nature had been fully revealed and Selvig was finally able to see for himself the being behind the myth.

Sometime later, Erik Selvig was summoned to the presence of Nicholas Fury. Fury opened a storage case, revealing a glowing cube. When Selvig asked what it was, Fury replied that it represented a significant source of power, if only they could find a way to tap it. Selvig accepted the challenge of investigating the object, while the apparition of Loki (who had been controlling him throughout the encounter) looked on with keen interest.

Selvig continued to study the Tesseract, the name by which the cube had been called, and built a machine to control and focus its energy. He had been duped into doing so by Loki's influence, thus paving the way for Loki to travel to the Tesseract's location at the Project Pegasus installation and steal the Tesseract. Selvig, under Loki's hypnotic control, later built a more refined portal generator in order to open a portal in New York that allowed the Chitauri to invade Earth. Subconsciously, he also built a shutdown failsafe into the system, whereby Loki's sceptre could be used to deactivate it. Spying the sceptre where it had fallen during the battle against Loki and the Chitauri, Erik alerted Natasha Romanoff to this 'back door' addition and advised her on how to shut the system down.

Retrieved from "https://marvelcomicsfanon.fandom.com/wiki/Erik_Selvig_(Earth-1010)?oldid=100023"
Community content is available under CC-BY-SA unless otherwise noted.