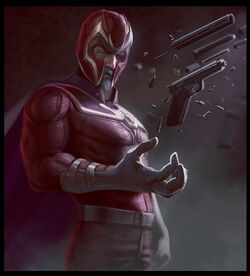 Earth-9999
Base Of Operations
Imprisoned in Ultron's Citadel
Characteristics
Gender

Mutants are the superior species. There's not denying that. But I've learned firsthand that when someone believes themselves to be superior over others... nothing good can come from that.

Erik Lehnsherr grew up in a concentration camp in Nazi, Germany before being freed by the Howling Commandos, including Captain America and Wolverine. But not before he could be experimented on so that the Nazis could utilize his powers. He became filled with rage and bent on revenge, until he met Charles Xavier, a fellow mutant, who helped unlock the latent passion in Erik's mind.

Erik was heartbroken when Charles was murdered by Apocalypse, and became determined to form a team of mutants who did not share his vision of world domination. He named the team the X-Men, in honor of his late friend, and even recruited his adopted children, Pietro and Wanda. But Erik would be heartbroken once more when Wanda abandoned the X-Men to become Apocalypse's Horseman of Pestilence.

Magneto would go on to recruit a good deal of mutants who operated on the living island of Krakoa to keep themselves hidden from Apocalypse. But the same did not go for Ultron, who became fascinated with Magneto.

Ultron went sent drones to overpower Magneto, eventually injecting him with a serum that neutralized his powers, and kidnapped him. He was imprisoned in the Citadel and kept as a lab rat, Erik found himself in great pain whenever he tried to use his powers, and reluctantly became resigned to his fate over time.

After spending years locked up in Ultron's Citadel, he was finally freed by the combined might of the X-Men, the Avengers, and the Outsiders. However, he would never leave the Citadel, as for the battle to be won, he, Nick Fury, and the Hulk would all have to band together in order to destroy the Citadel from inside, essentially neutering Ultron. However, Magneto did get a final chance to say goodbye to his son, Pietro, before his ultimate sacrifice.

Transportation: Capable of Flight via Magnetokinesis
Weapons: None known.

Retrieved from "https://marvelcomicsfanon.fandom.com/wiki/Erik_Lehnsherr_(Earth-9999)?oldid=246155"
Community content is available under CC-BY-SA unless otherwise noted.